Go to the M3Unify product page.

Bug reports, questions, comments can be emailed to support AT dougscripts DOT com. Include "M3Unify" in your subject line. A response will be sent ASAP. Before emailing, be sure your topic is not already covered here or in M3Unify Help.

Bug reports should contain precise details. If possible check Console.app for any M3Unify-related error messages. In case you don't know, Console.app is located in Applications/Utilities/. Launch Console.app and make sure the left column "Log List" is displayed. Select "All Messages" in the list. If nothing M3Unify-related is immediately visible, try typing "m3unify" in the search field of Console's toolbar. You will see some "helpful" log entries indicating progress, but error messages will be of significant interest.

You didn't get your registration code?

Please email me at support AT dougscripts DOT com and I will re-send.

"Share iTunes Library XML with other applications" is a setting in iTunes > Preferences... > Advanced (v12.2 and later). It gives other applications permission to access the current iTunes library's XML file [screenshot]. M3Unify needs to access this file to get information about the tracks and playlists in your library. Please be sure this setting is checkmarked ON. Otherwise, M3Unify will alert you about being unable to access your iTunes library information.

Some tracks can't be "dragged out" of iTunes

For a time, there was an iTunes bug whereby tracks dragged from the "Audiobooks" track list would contain nothing in the dragging pasteboard. Apple fixed this.

Currently, tracks cannot be dragged from the "Downloaded" track list. 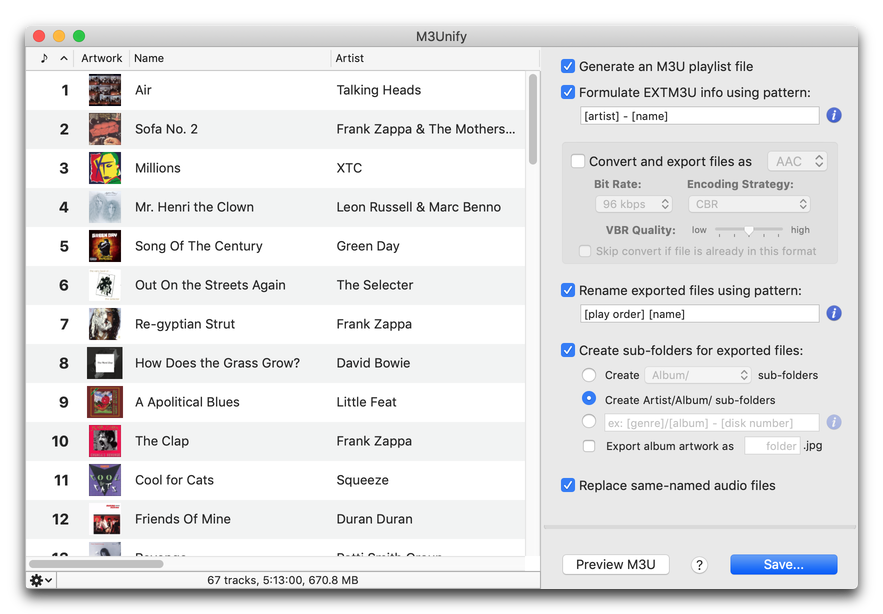 Some items may be rejected: Dragged tracks whose associated files are missing ("dead" tracks) or are not local (streamed Apple Music and Cloud Music Library tracks, or Shared Library tracks, for example) have no accessible files and will be rejected after the drag.

Once tracks are listed in M3Unify they can be sorted by clicking the column headers. When sorted by Play Order (the furthest left column) tracks can be re-ordered by dragging them within the list.

The current sort order can be copied to the Play Order from the action menu pop-up or the column headers' view options contextual menu or by clicking on "Copy to Play Order" in the View menu (Option-Command-C).

More columns are visible by re-sizing the main window. Control-click/Right-click in the column headers to show/hide columns, or select "View Options..." from the View menu.

As a convenience feature, Control-click or Right-click on a track and choose to display information about it in a Show Info panel. 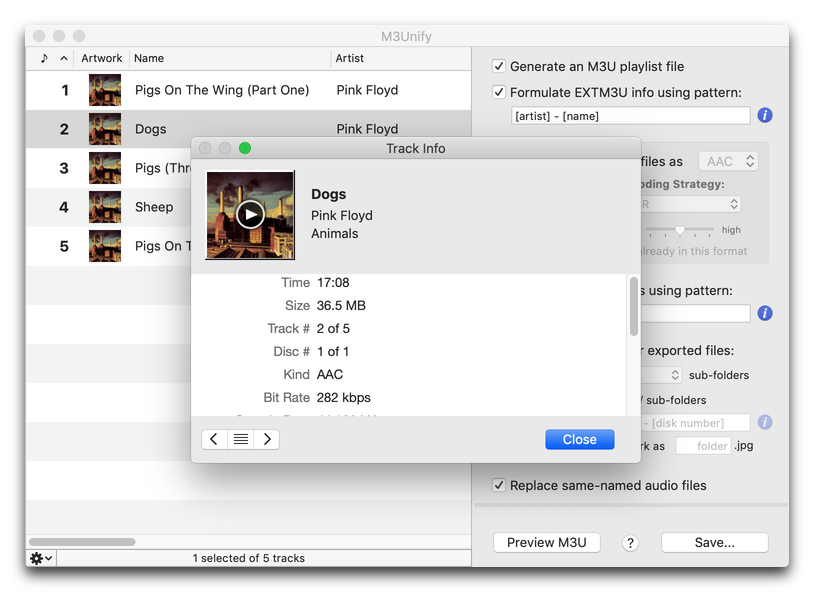 Use the arrow buttons (or the Left and Right Arrow keys of the keyboard) to navigate up or down through the list. Additionally, pressing the space bar while a single track is selected will open a QuickLook panel from which the audio can be played.

About artwork: M3Unify can display artwork image data only if it is part of a file's metadata. Invocations of QuickLook will display a file's icon, which, of course, is not necessarily its "album artwork" nor detectable as such.

When checked, will generate an M3U playlist using the relative file paths of the copied files and listed by the Play Order of the tracks in the list. The M3U playlist will be saved alongside the exported files (or sub-folders) in the directory you choose after clicking Save.

See the M3U entry at Wikipedia.

When checked, formulates Extended M3U track info (EXTINF) for each track listed in the M3U playlist file using a substitution pattern composed of special bracketed tags. The valid tags are listed in an info panel which can be toggled visible by clicking the blue "i" icons. When composing the M3U playlist, the bracketed tags will be substituted with the corresponding ID3 tags from each track.

The entered text must contain at least one valid substitution pattern.

Convert and export files as:

It may be handy to convert higher bit rate AAC, Apple Lossless, FLAC, AIFF, or WAV files to smaller AAC or MP3 files when exporting to a thumb-drive or SD card for mobile listening. Additionally, some older or less sophisticated players can only recognize MP3s.

Choose to create either AAC or MP3 copies of the files with basic metadata copied from the source track/file (Song Title, Artist, Album, Genre, Track Number, Disc Number if available) and extant artwork. Both AAC and MP3 conversions will be 2 channels with a sample rate of 44100 Hz. Bit rate settings can be user-set.

Copying and conversion times can also be affected by the type of media the files are being copied to. Exporting to a flash drive will be slower than exporting to a HDD or SSD drive.

During both AAC and MP3 conversion, a track's artwork, if it exists, will be added to the converted file's metadata if possible. Not all players recognize image metadata. (Also see Export album artwork as folder.jpg:, below.)

When files need to be sorted strictly by filename, use this option to formulate filenames using a substitution pattern composed of special bracketed tags. The valid tags are listed in an info panel which can be toggled visible by clicking the blue "i" icons. When exporting the files, the bracketed tags will be substituted with the corresponding tags from each track. (See the example under Formulate M3U track info using pattern: above.)

Exported files will be copied to sub-folders named using the corresponding tag info from the tracks. The sub-folders will be created if necessary. (See Preferences below for options preferring Album Artist over Artist when the former is available and regarding Compilation albums.).

Export album artwork as folder.jpg: When checked, and if track artwork exists, a single image file will be exported for each folder in which audio files are located. Presumably, this will be a discrete "Album" directory. By default this album artwork image file will be named "folder.jpg", which many audio players recognize for display purposes (others may use "album.jpg" or "cover.jpg"). Additionally, the dimensions of the exported image file can be restricted via settings in Preferences.

This option should only be used when an "Album" sub-folder is being created for exported files. Because only one "folder.jpg" file can exist per folder, results may be less than desirable when a sub-folder contains tracks from multiple albums.

If an audio file to be exported has the same name as a file in the Save location then the new file will over-write the existing file. If unchecked, same-named files will not be copied at all.

Audio players vary in the way they manage files, tracks and playlists. Some can read audio file metadata, others require a specific directory hierarchy; some maintain a database, others need to read the media each time, and so on. Experimentation may be required to achieve the correct export settings for any particular use.

The Preferences sheet is available by clicking "Preferences" in the Application menu or the action menu pop-up, or by pressing Command-comma.

Use Sound Check normalization during conversion to AAC

Generate Sound Check info for a file during AAC encoding.

Do not include artwork in metadata of converted file(s)

During AAC or MP3 encoding, prevent album artwork image data from being applied to the converted file's metadata.

Pad occurrences of [track number], [disc number] and/or [play order] digits used in extended track info or filenames with zeroes to the length chosen in the popups.

Group compilation album tracks when "Artist/Album/" is chosen, similarly to how Music/iTunes groups such albums in a "Compilations" folder rather than an "Artist" folder. (This setting is ignored for any custom substitution pattern directories.)

By default, the Compilations folder is so named. Other possibilities include "Various Artists", "Collections", "Best Ofs" and so on

When naming files and sub-folders:

Substitute underscore character for all but 0-9a-zA-Z-,._. Some drive formats may "mangle" file and directory names if they contain certain text characters, such as upper-ASCII, non-standard Unicode or control characters. Checking this setting will replace all but basic alphanumeric characters (0 thru 9, a thru z, A thru Z and dash/hyphen, comma, period and underscore) with an underscore character. This only affects file and sub-folder naming and not metadata or display text.

Use \ (backslash) as path delimiter in M3U file. A player may only recognize file paths in the exported M3U file that use this MS-DOS-style delimiter. However, the default / (slash) character will likely be suitable in most cases. As they say, if you're not sure what this is then you probably don't need to change it.

When embedding and/or exporting album artwork:

New as of version 1.12.0: This setting only applies to image data that is embedded during file conversion and image data when exported as a JPG file—it does not affect audio files that are simply copied. The maximum size of the artwork data exported can be set by entering a number indicating the square pixel dimension; any image larger than this size will be downscaled. In general, a number between 300-600 pixels is a decent smaller size.

The Finder may create "dot-underscore" files—invisible files that contain file attributes Windows doesn't recognize—after copying or converting files to a MSDOS FAT-formatted drive. When this setting is checked, these files will be deleted.

This will reset all warning alerts that have been individually suppressed (by clicking an alert's "Don't Show This Again" button).

Display a secondary window that displays the M3U as it would be configured using the current Play Order, Export Settings and Preferences.

Press the Save button to select the location in which to save the files and the M3U file. A Save panel will be displayed:

When satisfactory, click the Save Panel's Save button. The M3U will be generated—if this option is selected—and the files will be copied to the selected location.

Pressing your keyboard's escape key will cancel the Save operation. Files moved previous to cancelling will remain in their new locations.

Files that could not be converted or copied—for whatever reason—will be colored red after the Save operation has completed. Specific errors will be logged to the Console.app. These tracks should be removed from M3Unify.

This feature was added in M3Unify v1.10.0 - It may be convenient to export an M3U playlist that references files which are already in an established location. For example, audio files that have been previously stored on a thumb drive can be dragged to M3Unify and an M3U playlist file can be exported that will reference those files in their current locations. No audio files are copied or converted during these Export operations.

(In addition to standard keyboard shortcuts.)

M3Unify does not alter any files or tracks in your music library. It works on copies.

v1.6.0 (dec 22 '16):
- Files can be added by dragging to app's icon, Dock icon, or using Finder's "Open With..." command
- Deploys "Open in M3Unify" Service
- Adds command to just export a M3U file using absolute file paths of all listed tracks (can only be useful to a player with access to files in their current location)
- Fixes potential error with iTunes MP3 conversion of files dragged from the Finder
- Minor performance improvements

^
Site contents © 2001 - 2022 (that's right: 2001) Doug Adams and weblished by Doug Adams. Contact support AT dougscripts DOT com. About.
All rights reserved. Privacy.
AppleScript, iTunes, iPod, iPad, and iPhone are registered trademarks of Apple Inc. This site has no direct affiliation with Apple, Inc.
The one who says "it cannot be done" should not be interrupting the one who is doing it.

Go to the AppleScripts section.