Scripts for iTunes Don't Run in macOS 10.15 and Later

AppleScripts created to work with iTunes will not work in macOS 10.15 Catalina and later. They can't. There is no iTunes application for them to work with. They won't even launch properly. So don't bother downloading them unless it is to a computer running macOS 10.14 Mojave or earlier, where they will still function properly with iTunes.

You Already Have AppleScript

AppleScript is part of the macOS so there's nothing to install except the scripts you'll download.

Actually, there may be something else to install if you are using an M1 (or better) Mac: the Rosetta 2 software that enables software built on an Intel Mac to run on Apple silicon Macs. While most modern versions of AppleScripts at this site are Universal builds—that is, they are able to run on both Apple silicon and Intel processors—you may still have an older Intel version of an AppleScript and this will compel the installation of Rosetta 2. Again, be sure to check for updates.

Scripts in the Music Script menu are listed like menu items.

• All Users
If you want an AppleScript for Music to be available for all user accounts on your machine you'll install it once in the "Scripts" folder located in your [startup disk]/Library/Music/ folder. This Library folder is often called the local Library folder.

If there is no "Music" folder or "Scripts" folder in the [startup disk]/Library/ folder then create them.

• Single User
To make an AppleScript accessible for just a single user then you'll install it in the "Scripts" folder in that user's [username]/Library/Music/ folder. The user Library folder is hidden by default. One way to make it visible is to press and hold the Option key on your keyboard and select Go > Library from the Finder.

If there is no "Music" folder or "Scripts" folder in the [username]/Library/ folder then create them.

Some scripts have been designed to work with both the Music and the TV app. Such scripts will only work with Music by default. In order for them to work with the TV app, they must be installed in the [username]/Library/Apple TV/Scripts/ folder. If necessary, sImply create a copy of the script and put it there. Just don't run more than one copy at a time.

Some AppleScript applets and droplets don't need to be installed in a "Scripts" folder and instead can be installed wherever it is easiest to access them. See the Read Me that accompanies the script for install options that may be available.

• It may be that settings you have entered elsewhere prohibit using the Option key as the shortcut to reveal the Library item in the "Go" menu. If the Library folder does not display in the Finder's "Go" menu with the Option key pressed, try the Shift key (see this tip from Rob Griffiths).

• But Wait! There's More! There are two other locations in which AppleScripts can be installed so that they will appear in the system-wide Script menu that appears at the right end of the Menu Bar. This can be set up by going to Script Editor's Preferences, selecting the General tab and check marking "Show Script menu in menu bar". Scripts will appear in this menu when they are installed in either the [startup disk]/Library/Scripts/ folder or the [username]/Library/Scripts/ folder. For more flexibility, add an "Applications" folder containing application-named folders. For example: [username]/Library/Scripts/Applications/Music/. Scripts can be placed in the the application-named folders so that they only appear when that app is frontmost.

As mentioned earler, I generally recommend installing scripts in [username]/Library/Music/Scripts/.

Once you have found a script on the site that you'd like to use, click on the red download button in the top-right corner of its entry page:

(Older versions of the script may be available as direct downloads and will be listed in the "Particulars:" section on the entry page.)

The disk image window when mounted and opened. Instructions are right on the can.

Finally, close the disk image window and unmount it (click the arrow button to the right of its name in the Finder's sidebar under "Locations").

You can backup the .dmg file, if that's what you do with your downloads. Otherwise, you can Trash it.

As of macOS 10.15 Catalina, developers are required to have Apple "notarize" their software. Notarization is a Gatekeeper security feature whereby a developer submits their software to Apple to check for malicious software. All scripts for macOS 10.15 and later uploaded to this site have been notarized by Apple.

When you launch an AppleScript downloaded from this site for the first time you will see an alert with a message like this: 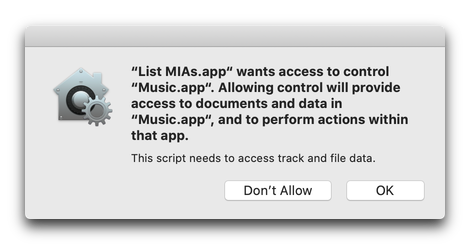 This is a layer of security which ensures that you are made aware of when a script needs to access certain resources on your computer. In the case of scripts from this site, they will inform you that the script needs to interact with Music or TV (and perhaps the Finder or other applications if so required). While this may seem self-evident it is certainly possible that a bad actor could convince you to launch a script from some other site that does not do what it says and instead does something else nefarious.

This alert will only appear once. If you happened to click "Don't Allow" and want to permit access for a particular app, head to System Preferences > Security & Privacy > Privacy > Automation, you will see the list of apps that use automation and which apps they target: 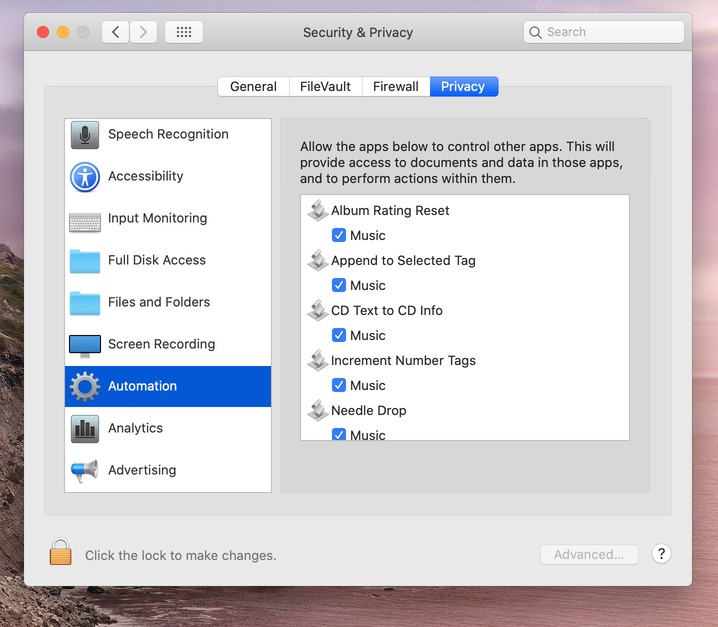 If necessary, put a checkmark next to the app you want to allow access to in the script's entry. Or you can uncheck an app if you suspect the listed AppleScript is up to some funny business.

Additional Security Concerns: A very small number of AppleScripts from this site will need access to "System Events", an Accessibility application that can be controlled by AppleScript. Controlling "System Events" will enable a script to push buttons, click menu items and perform other interface-related actions—strictly related to the script's essential operation only. In such a case, an additional alert will ask you to change a setting in the System Preferences > Security & Privacy > Privacy > Accessibility panel.

Click the "Open System Preferences" button and the Accessibility panel will open and be selected. 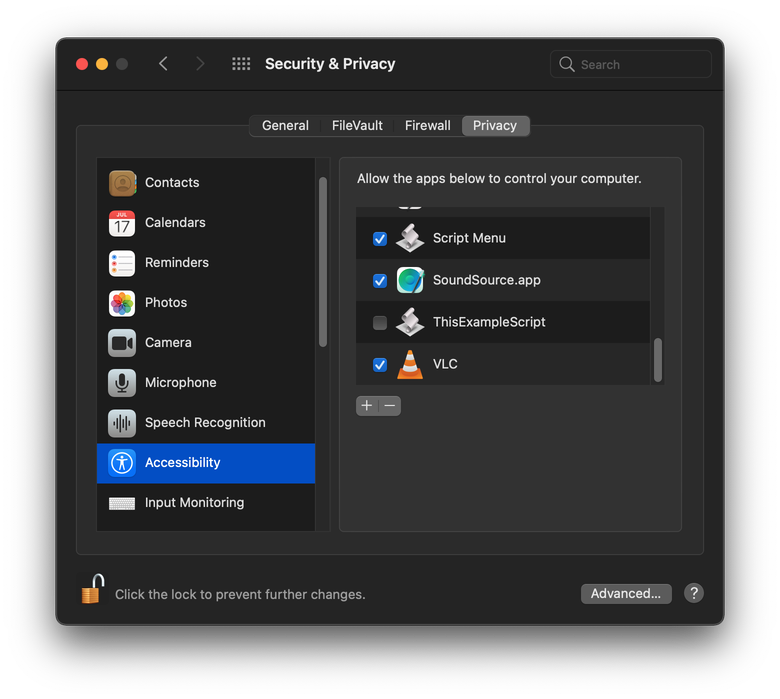 This will only occur once; your computer will allow the script to operate without asking for security clearances again.

BUT. Because all of these clearances occur when a script first launches, the script will probably not complete its start-up procedure correctly and so you will have to re-start the script.

Like most applications, AppleScripts need to be updated on occasion. This can be due to updates and changes to the Music app or TV app itself, or because the author has discovered bugs or a better way to write the routines. In any case, AppleScripts from this site are occasionally updated. You can find the version number for a script in several places:

Not for nothin', but I put a lot of time into creating the Read Me document for each script—the accompanying .rtfd document—so it is to your advantage to read it and keep it handy for future reference. I know how people feel about Reading the F'ing Manual (and I do try to make the scripts I write as intuitive to use as possible), but it's pretty silly not to.

I understand that I can't account for everyone's computer set-up. If you have any problems installing or using a script from this site, let me know. My contact info is in every Read Me. Otherwise, have fun!

^
Site contents © 2001 - 2023 (that's right: 2001) Doug Adams and weblished by Doug Adams. Contact support AT dougscripts DOT com. About.
All rights reserved. Privacy.
AppleScript, iTunes, iPod, iPad, and iPhone are registered trademarks of Apple Inc. This site has no direct affiliation with Apple, Inc.
The one who says "it cannot be done" should not be interrupting the one who is doing it.