John Paczkowski reports the USB Implementers Forum has decided that Apple is not hampering competition by blocking the Pre from syncing with iTunes. The USB-IF additionally suggests that it is Palm that may be in violation of the rules. Ruh-roh.

Apple has released an iTunes update and describes pretty explicitly (for Apple) what the fixes are, like the issue with the zoom button, unexpected quits, and unresponsiveness, the latter two of which I experienced a couple few times.

Tell you one thing. It installed a lot faster on Leopard than it did on Snow Leopard.

Now, did they fix the discrepancy with displayed track sizes versus displayed Finder file sizes under Snow Leopard (my pet radar report)? No: 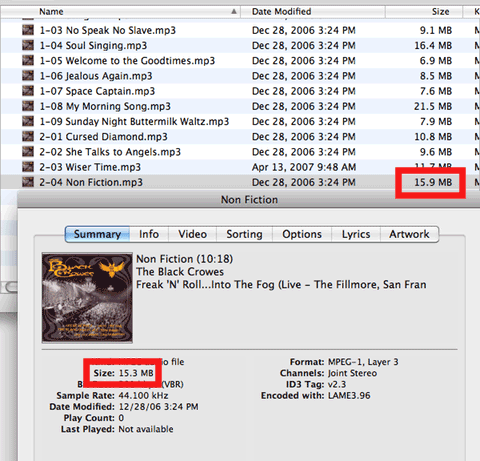 The news about Apple working with the music labels to "stimulate digital sales of albums by bundling a new interactive booklet, sleeve notes and other interactive features with music downloads" is interesting, but these so-called "interactive" downloads are not new. As I recall, there have been several available from the iTunes Store, usually as part of larger "box" sets. They open in QuickTime and have virtual pages and hot links and they're pretty cool, depending on how they are designed.

Although I don't think it likely, wouldn't be surprised if DRM was part of the "talks".

iTunes 8.2.1 does not fix the all/none situation.

Apple put iTunes 8.2 up on the web and in Software Update, along with a QuickTime and GarageBand update. 8.2 sports accessibility and bug fixes, compatability with iPhone Software 3.0. I've been away all day and haven't given it a run through, so perhaps there will be more to report later.

Correspondent Peter Kappesser noticed that under iTunes 8.1 AppleScripts to which he had assigned keyboard shortcuts (via the Keyboard Shortcuts tab in Keyboard & Mouse of System Preferences) would be activated twice when launched by the keyboard shortcut. Thus, they will perform their task twice in a row. I can verify it happens at my house, too. File a bug report.

Both TidBITS and iLounge surmise that reports of iTunes 8.1 video-Genius capabilities may have been premature on Apple's part, since the description of this feature has been removed from the iTunes What's New page, and quite obviously it is not working in iTunes 8.1. Should a v8.1.1 be expected soon?

posted in Apple, iTunes, Rumors
Site contents © 2001 - 2020 (that's right: 2001) Doug Adams and weblished by Doug Adams. Contact support AT dougscripts DOT com. About.
All rights reserved. Privacy.
AppleScript, iTunes, iPod, iPad, and iPhone are registered trademarks of Apple Inc. This site has no direct affiliation with Apple, Inc.
The one who says "it cannot be done" should not interrupt the one doing it.