Rob Griffiths (of Many Tricks and founder of Mac OS X Hints) had a rough couple of days this past weekend trying to get his new iPhone 6 to sync with his iTunes library. It just wouldn't. He writes about the ordeal in "An iPhone 6, (no) movies, and me".

It turns out, as Rob reports in a follow-up, "A nasty little iTunes/iOS bug may be causing media sync issues", that there's a bug in the pipeline between the current versions of iTunes and iOS 8. The syncing may stop if you have duplicates of purchased media files.

At first, Rob tried using iTunes' "Show Duplicates" tool to locate any duplicates. But it didn't find every duplicate track entry (it's not very rigorous, even using "Show Exact Duplicates"). He then turned to my duplicate managing app Dupin and was able to find the dupes by jiggering the Criteria settings to find album tracks with the same track number—matching using the name of the tracks failed because the duplicates had slightly different titles. (I'm pretty sure iTunes' "Show Duplicates" always considers the name of the tracks.) Once he eliminated the duplicates the syncing went fine.

I must admit, this doesn't affect me and I hadn't even heard about this issue until now. Of course, it's still early days with iOS 8 adoption.

Apple has released iTunes 11.4 with support for iOS 8, which is due for release on September 17.

[UPDATE: In iTunes 12.2 and later, selecting "Music" in this script will go to the "New" section of Apple Music. The other kind selections work as expected.]

if opt is false then return

repeat with i from 1 to length of chooseOptions

if opt as text is (item i of chooseOptions) then

set opt to (item i of optList)

Save that as something like "Power Search" in your ~/Library/iTunes/Scripts/ folder and assign it a shortcut. When you launch it, you can select the area you want to search: 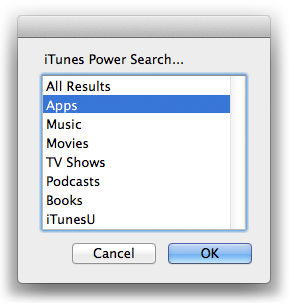 Apple has posted iTunes 11.3.1 which fixes some podcast related issues.

Apple has released iTunes 11.2.2 which fixes some podcasting downloading issues.

posted in Bug or Feature?, iTunes 11

Genius Playlists Can Be Shuffled

So I just discovered that everytime I play a Genius playlist it plays in the same order. My guess is that everybody else already knew that.

When I told Kirk McElhearn about this he imagined that one could create several Genius Playlists based on the same Artist seed in order to maximize variety. So I tried that. And here's what's cool:

I like this because I can maintain the Genius playlists longer without having to refresh or recreate them.

posted in iTunes 11, Tips and Info

iTunes 11.2 is out and primarily fixes some Podcast management features, fixes unresponsive Genius updating (I had that!), and (as usual) improvements to overall performance and stability.

Apple has released iTunes 11.1.5 which fixes a problem with unexpected quits while connecting a device and improves compatibility with iBooks. Not sure what issues with iBooks are addressed.

A funny thing started happening shortly after the introduction of iTunes 11 a few months ago. I began getting reports from Correspondents about usually reliable scripts that weren't working correctly. After closer scrutiny, we were able to determine that some of their media files were appearing twice in the library. That is, they were finding pairs of identical tracks in the "Music" library that each pointed to the same file. Like this:

This is not ever supposed to happen. iTunes should not allow a file in a unique location to be added to its library more than once.

Now, this is not the same effect as copying a library track two or more times to a playlist, whereby only one library track is involved. Nor is it the same as when iTunes appends a number to a filename to distinguish it from an earlier-added same-named file. Nor do these tracks seem to be a flavor of iTunes Match duplicates (iTunes Match may or may not be a factor in their appearance). This issue manifests as sets of two distinct library track entries, each having different IDs and both having the same value for the Location property.

I don't know how this happens. But it definitely has something to do with moving media files around the wrong way and doing so with iTunes 11. It may be a bug and it may even be fixed by now. But I don't know. I only got it to happen once myself while I was experimenting convolutedly with a different issue and I haven't been able to replicate it since.

Regardless of how these pairs came to be, how now to find them and then to deal with them? If you have a very large library, you may not even notice if you have any faux pairs.

My duplicate removal apps, Dupin and Dupin Lite, can detect this condition but won't attempt to delete any files. If the file of one of the tracks were deleted, well, then neither track would be pointing to a file any longer and you'd have a lot of dead tracks. There's a trick to using Dupin to delete an arbitrary one of each of the track pairs, but, technically, they're not the sort of "dupes" that Dupin wants to handle.

So, the applet Scan For Double Entries simply looks through your library for track entries that have the same file path (that is, the same file location) and will copy these pairs of tracks to a discrete playlist so you can sort them out yourself. Presumably you'll want to delete one of the tracks in each faux pair and I'm not sure that's something you want an automated tool to do for you, you know, automatically.

posted in Bug or Feature?, iTunes 11, Managing Tracks
Site contents © 2001 - 2022 (that's right: 2001) Doug Adams and weblished by Doug Adams. Contact support AT dougscripts DOT com. About.
All rights reserved. Privacy.
AppleScript, iTunes, iPod, iPad, and iPhone are registered trademarks of Apple Inc. This site has no direct affiliation with Apple, Inc.
The one who says "it cannot be done" should not be interrupting the one who is doing it.