This script uses information from the single selected track as the basis for a search of the IMDB (Internet Movie Database) website. It's probably most useful with the TV app, but it works with the Music app, too. 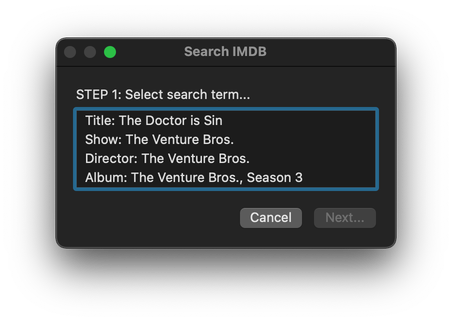 UPDATED: This Tag That Tag v5.5

For macOS 10.15 Catalina and later only. This applet will assist with swapping, copying, and appending data between two user-chosen tags in selected tracks or tracks in the selected playlist:

The latter three actions also provide an option to delete the info from the first tag after the copy. Read Me explains all.

More information for This Tag That Tag v5.5 and download link is here.

This script will set the bookmarked playback pointer of the selected tracks (established when a track is set to "Remember playback position") to 0 seconds, effectively clearing the bookmark.

More information for Clear Bookmark of Selected v3.0 and download link is here.

Ready for the Music App?

As of this date, it'll likely be a couple of weeks before Apple releases macOS 10.15 and the new Music app. The Music app is, essentially, iTunes stripped down to just its "music" components. You shouldn't have any troubles with it. Unless you bring your troubles with you.

If your iTunes library is a mess now, then your Music library will be a mess later.

Why not begin your Music experience with a sweet and tidy music library. This would be a good time to do some of that iTunes house-keeping you've been putting off: cleaning up tags, fixing artwork, paring dead tracks and non-essential playlists, minding the duplicates, backing stuff up and so on.

I keep a list of scripts recommended by task for just such occasions. You've probably still got a couple of weeks.

If you're on the macOS 10.15 beta, be sure to try out some of the Music-and-TV-ready scripts I've already posted.

I was recently a guest on the MacVoices podcast, hosted by all around Good Dude, Chuck Joiner. Had a great time talking about our post-iTunes future.

Doug's Check For All Updates v1.0

In case it isn't crystal clear: scripts written for iTunes will not work on macOS 10.15 and later. Since the iTunes application isn't available on the new OS, scripts that target it will fail. So, almost every script on the site will need to be re-written to work with the macOS Music and/or Apple TV apps that replace iTunes in macOS 10.15.

Oh, I'm keeping busy, all right. I would like to be posting updates for use with the Catalina betas. But there are currently some issues in the betas that have precluded me posting any Catalina-compatible scripts yet. I have no doubt that Apple will fix these minor glitches well before Catalina's offical release; I just don't know how soon. And even then, there will be a gradual rolling-out of script updates through the summer and fall.

To help users keep track of what scripts for which operating system have been updated and when, I've posted Doug's Check For All Updates. It's an applet that will survey your computer for all the scripts you have installed from dougscripts.com and generate a report listing which have been updated. This is unlike the "Doug's Check For Update" script, which can only check one script at a time.

Doug's Check For All Updates will work right now on any version of macOS 10.10 and later, including the macOS 10.15 betas.

May I suggest that it may be helpful to get some work done on your iTunes library with the latest tools now, before you update to Catalina and the new media apps. Your favorite script(s) may not be Catalina-ready by then.

A security aside: This is the first download I am posting that has been notarized by Apple, a requirement for third-party software if it is to be distributed outside the Mac App Store. As such, it is also the first download to be packaged as a .dmg (disk image file) without the .zip wrapper. The code-signing and notarization process in my workflow make it easier to process a disk image without the additional ZIP compression. All future new and updated scripts will be likewise packaged as DMGs.

Apple has released iTunes 12.6.1 with "minor app and performance improvements". Updates for each operating system were also released today. More as it develops.

iTunes v1.0 was announced and released on January 9, 2001. I don't think a day has gone by since that date that I haven't used iTunes. Seriously. It's probably the most regularly used app on any of my machines. Love it or hate it, for better or worse, you have to acknowledge that iTunes has had a huge impact on how music is consumed. Amazing. (Kirk McElhearn has written a fifteenth anniversary tribute that covers the milestones.)

And, lest they be forgot, here's a shout out to the developers of SoundJam MP, the jukebox app that Apple bought and re-christened as iTunes: Bill Kincaid, Jeff Robbin and—most especially as far as I'm concened—Dave Heller, who incorporated AppleScript into SoundJam and then iTunes.

Apple has released iTunes 11.3 featuring the all-new iTunes Extras for HD movies, which will also be available for Apple TV.

Search for Scripts from the Help Menu

I may have known this. But I guess I forgot about it. So I was pleasantly surprised when I found you can type the first few letters of a script you want to use (that is installed in ~/Library/iTunes/Scripts/ so that it appears in the iTunes Script menu) in the Search box in iTunes Help menu. These scripts are seen as menu items, so any script containing the entered text will show in the "Menu-Items" result. Then, if you hover the mouse over the script's name, the actual Script menu pops up with the script highlighted and that hovering blue arrow pointing at it:

posted in iTunes, Tips and Info
Site contents © 2001 - 2020 (that's right: 2001) Doug Adams and weblished by Doug Adams. Contact support AT dougscripts DOT com. About.
All rights reserved. Privacy.
AppleScript, iTunes, iPod, iPad, and iPhone are registered trademarks of Apple Inc. This site has no direct affiliation with Apple, Inc.
The one who says "it cannot be done" should not interrupt the one doing it.