I'm pleased to announce the debut of Apps Assist, a utility application (it's not a script) that can display the installed, missing and orphaned iOS apps on your Mac. 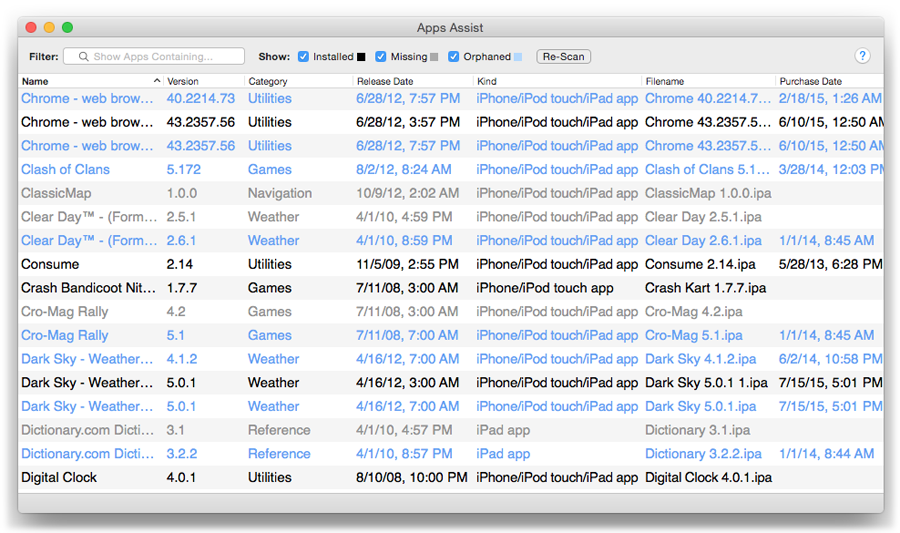 If you've been an avid downloader of iOS apps over the years and back them up via iTunes to your Mac but never had a look in your Mobile Applications folder, well, I shudder to think how many files you've got in there that may be outdated, duplicated, or abandoned. To my own surprise, I had over twice as many unused versions of apps in there than I had installed apps.

Apps Assist will help you easily determine which apps are viable and which you might consider sending to the Trash. In the screenshot above, the black colored iOS app listings are installed, the gray ones are missing (these appear iconless and gray in iTunes), and the blue ones are orphaned in the Mobile Applications folder—they're just outdated or otherwise not installed. Apps Assist provides tools to filter and sort the apps list, Trash selected files, view selected apps' .ipa files in the Finder, export the apps list as a tab-delimited text file, and more. Probably most handy is being able to see the Filenames and Purchaser IDs for each app.

Apps Assist requires iTunes 12.2 or later running on OS X 10.8 or later. It's free to try with limited functionality and frequent nags urging you to purchase a registration code for $1.99, which will restore full functionality.

posted in Apps Assist, iTunes 12.2
Site contents © 2001 - 2020 (that's right: 2001) Doug Adams and weblished by Doug Adams. Contact support AT dougscripts DOT com. About.
All rights reserved. Privacy.
AppleScript, iTunes, iPod, iPad, and iPhone are registered trademarks of Apple Inc. This site has no direct affiliation with Apple, Inc.
The one who says "it cannot be done" should not interrupt the one doing it.