AppleScript is great for performing tasks that can be aggravatingly repetitive for humans (Mac-using humans, anyway). However, it is not always the best solution to a perceived problem with tag editing in iTunes.

It seems to me that some users are ignoring (or are perhaps anxious about using) several built-in features of iTunes that makes tag editing relatively fast and simple.

Multiple Item Editing - I am always surprised that even seasoned iTunes users don't know about this which has been available since iTunes was Sound Jam. Select two or more tracks and choose "Get Info" from the iTunes Edit menu (or press Command-I). Unless you've turned the warning off, a dialog will appear that asks if you're sure you want to edit multiple items. Yes! Press the "Edit Items" button. An Info window will appear that is similar to the Info window for a single track except it will not contain single-track specific tags, like Name-related tags.

Smart playlists - Creating temporary Smart playlists is the fastest way to assemble a batch of tracks that have similar attributes. Use them liberally. Select all the tracks that have been assembled (Command-A to Select All) and multi-edit them. You don't have to keep a Smart playlist around when you're done editing the tracks it contains. In fact, at my house I consider all playlists semi-temporary. On the other hand, keeping a live-updating Smart playlist around for track tags you occasionally want to edit (say for converting track ratings to some loved or disliked equivalent) is a good idea, too.

No disrespectin', but it sometimes seems to me that some users are trying to create a set-in-stone just-so library (emulating bookshelves of pristinely ordered CDs or LPs?) and are reluctant to use some of these techniques because things'll get messed up. But the tools available in a digital media library actually make it very easy to quickly access anything at any time. Give in to their power.

posted in Tips and Info 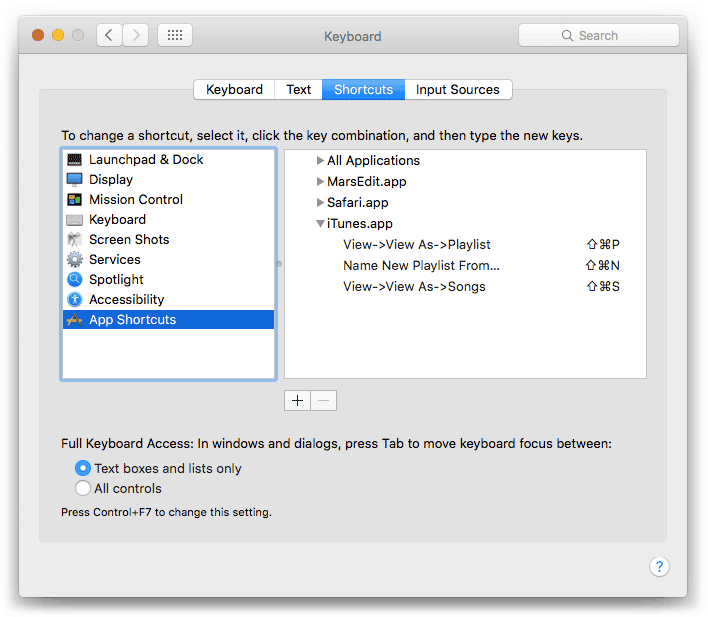 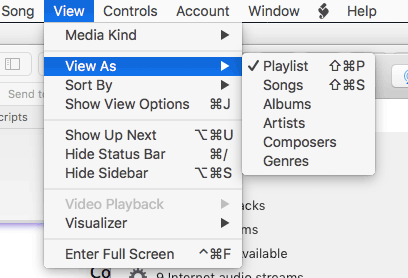 posted in Tips and Info

Check For Library Corruption With xmllint

A Correspondent recently reported that a script which needed to read the current "iTunes Library.xml" file was failing. This XML file, as you may know, is exported periodically by iTunes and is pretty much an abridged output of the actual iTunes database. Even the XML file exported by iTunes' File > Library > Export Library... command was unable to be read. This suggested that there might be some corruption in the track entries, (I recently had a similar report and that database contained corruption that prevented the XML from being exported; the user reported that the XML had last been updated in 2012.)

iTunes can seem to behave normally even if there are tracks with corrupted track entry data or corrupted metadata in their files. So you might not even be aware of corruption until a third-party appliance elicits errors.

There is a command-line tool called xmllint that can find some corruption in the "iTunes Library.xml". You can run it from Terminal, or in a script like this:

This will error when it finds some badly encoded or improper UTF-8 text, which is often the culprit. Then it's just a matter of finding the troublesome tracks in iTunes and fixing the problems if possible. Usually this means just editing the tags in iTunes.

Genius Playlists Can Be Shuffled

So I just discovered that everytime I play a Genius playlist it plays in the same order. My guess is that everybody else already knew that.

When I told Kirk McElhearn about this he imagined that one could create several Genius Playlists based on the same Artist seed in order to maximize variety. So I tried that. And here's what's cool:

I like this because I can maintain the Genius playlists longer without having to refresh or recreate them.

posted in iTunes 11, Tips and Info

UPDATED: This Tag That Tag v3.4

This Tag That Tag v3.4 will assist with swapping, copying, and appending data between two user-chosen tags in selected tracks or tracks in the selected playlist: 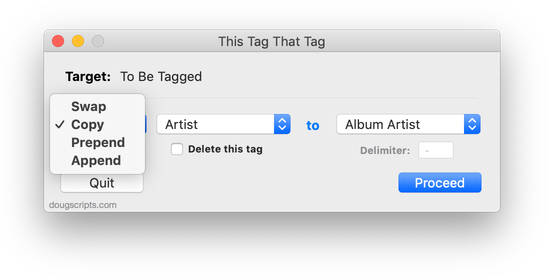 The latter three actions also provide an option to delete the info from the first tag after the copy.

This latest version adds "Category", "Description" and "Episode ID" text tags as options and a few minor tweaks and adjustments.

Search for Scripts from the Help Menu

I may have known this. But I guess I forgot about it. So I was pleasantly surprised when I found you can type the first few letters of a script you want to use (that is installed in ~/Library/iTunes/Scripts/ so that it appears in the iTunes Script menu) in the Search box in iTunes Help menu. These scripts are seen as menu items, so any script containing the entered text will show in the "Menu-Items" result. Then, if you hover the mouse over the script's name, the actual Script menu pops up with the script highlighted and that hovering blue arrow pointing at it:

posted in iTunes, Tips and Info

German iPhone site iPhone Ticker posted a nice article and You Tube video describing how to use my free Make Ringable script to create ringtones from your iTunes tracks.

posted in ringtones, Tips and Info

There are no shortcut keys to select the Music, Podcast, TV Shows, and other libraries. But you can use AppleScript to create some. Here's how:

END_OF_DOCUMENT_TOKEN_TO_BE_REPLACED

All Those Audio Formats

Via Lifehacker, this How-To Geek article is a great primer on the differences among digital audio formats.

posted in Managing Files, Tips and Info
Site contents © 2001 - 2020 (that's right: 2001) Doug Adams and weblished by Doug Adams. Contact support AT dougscripts DOT com. About.
All rights reserved. Privacy.
AppleScript, iTunes, iPod, iPad, and iPhone are registered trademarks of Apple Inc. This site has no direct affiliation with Apple, Inc.
The one who says "it cannot be done" should not interrupt the one doing it.