Some App Updates for Catalina

I've just posted updates to two of my apps, Join Together v8.0 and M3Unify v2.0.

Join Together can create a single audio file from the two or more audio tracks you drag to it, from Music, iTunes or the Finder. 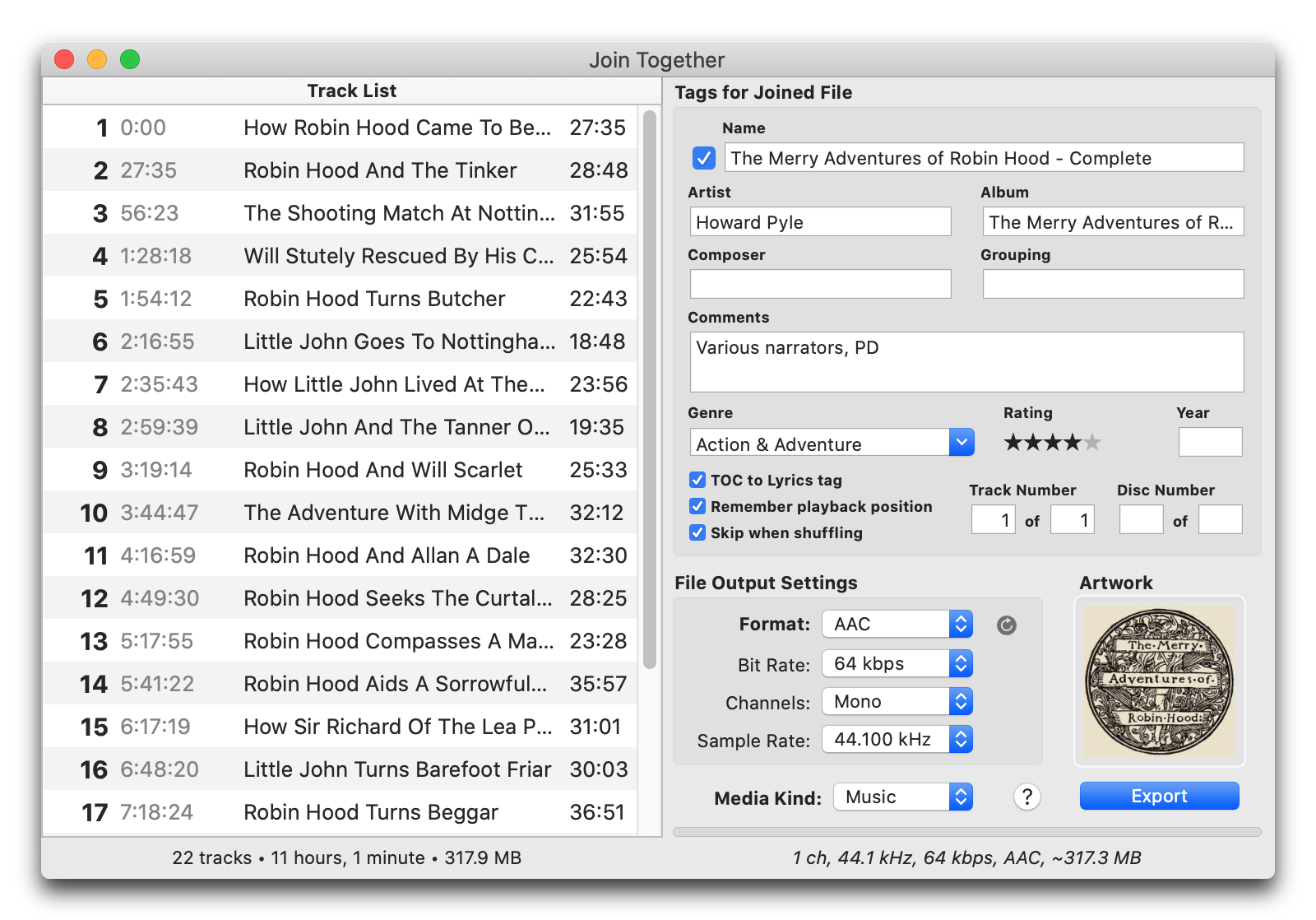 M3Unify is a file utility that helps you manage copying audio files to a folder, drive, thumb or SD drive, ostensibly for use with portable and car audio devices. 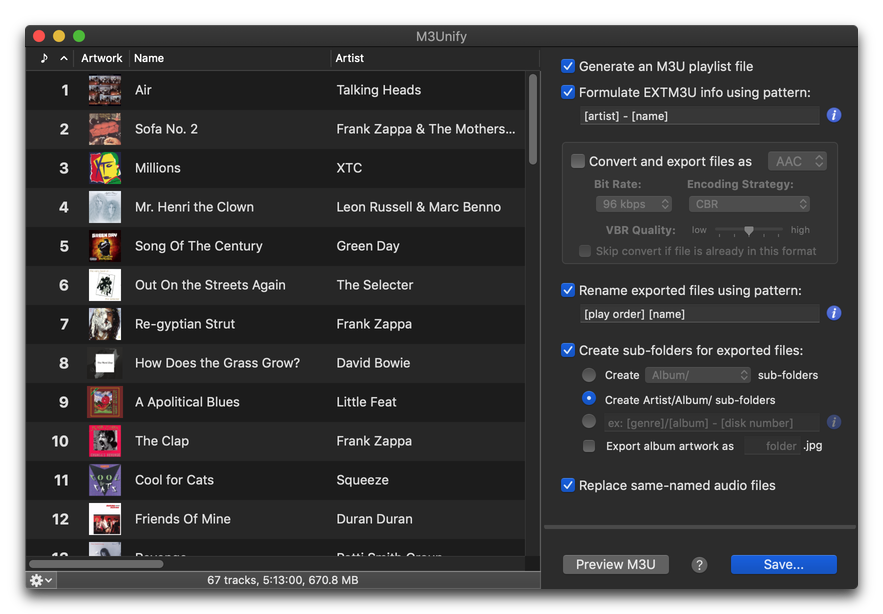 posted in Catalina, Join Together, M3Unify

To date, there have been a few issues with the High Sierra betas, as one expects. But the latest versions of these apps should be fine running in the latest betas. There may be some additional updates when the final version of macOS 10.13 is released later this year.

Even if you're not running a High Sierra beta, you should update to these new versions of Join Together and M3Unify since they also have performance fixes and enhancements. And everybody likes those.

Join Together has been updated to version 7.7.1. I am extremely gratified that this venerable software of mine—which began its life at the turn of the century as a basic AppleScript workflow between iTunes and QuickTime—has remained popular. 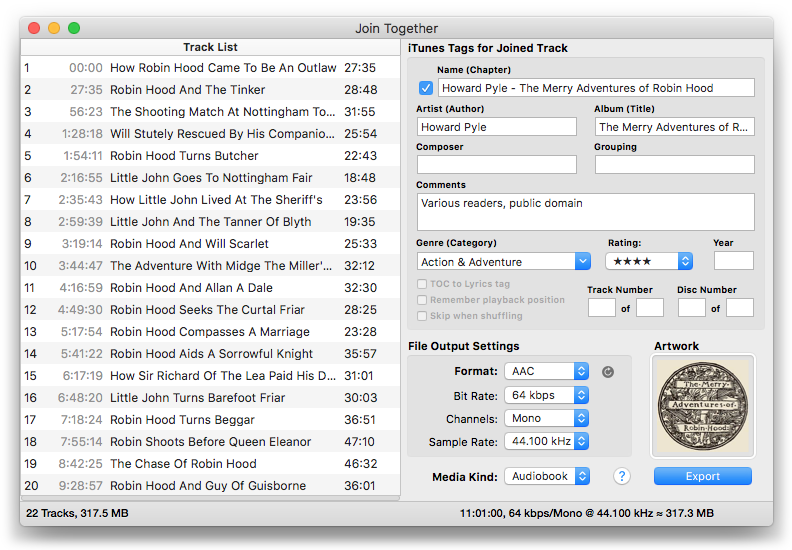 While many people use this for audiobooks, I've lately taken to creating Sides of music albums. For example, "Exile on Main Street" is one of my favorite albums. I'm old enough to have purchased the original vinyl version and so I'm quite innately used to experiencing it as four separate record sides. I used Join Together to re-create four audio files comprised of the album's four album sides. I even found the artwork for the original album's sleeves, which has the track and personnel listings: 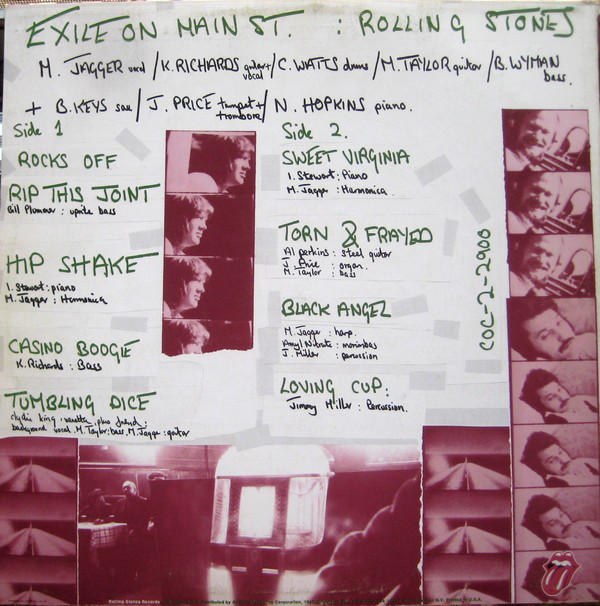 Anyway. This is a free update to registered Join Together users and $5 to purchase. More info and download is on this page.

Use Overcast and Join Together to Listen to Audiobooks

Marco Arment's Overcast iOS podcast app has been updated to v2.5. I use Overcast exclusively for podcast listening. It's fantastic. The latest version of Overcast has a great new feature: file uploads. Patrons of Overcast are allowed 2GB of cloud space in which to upload files up to 250MB each. This is a great way to get audiobooks into Overcast from iTunes whereby you can take advantage of Overcast's playback effects, like smart speed and voice boost.

And a great way to prepare audio files for upload to the Overcast cloud is to use use my Join Together app to consolidate the files of an audiobook to just a single file (or a small batch of individual files) under 250MB. In fact, it's likely you could get about eight hours of decent-sounding spoken word audio in a single audio file under that limit when it's encoded at 64kbps.

First, you need to be a patron of Overcast. Which means you've made an in-app payment in the Overcast app and registered. I'm an annual patron at $11.99 per year, but there are three-month and six-month patronage plans available also. Only patrons will be able to upload files to the Overcast cloud.

Use Join Together to create a Music file from a batch of tracks in iTunes (I had trouble with one m4b audiobook file created with Join Together and I'm not sure what the issue was. If I manually changed the extension to m4a in the Finder there was no problem.) Join Together will display the approximate final file size as tracks are dragged to it or the bit rate settings are changed. You want to make sure to keep your final file under 250MB (as underlined in red, below). 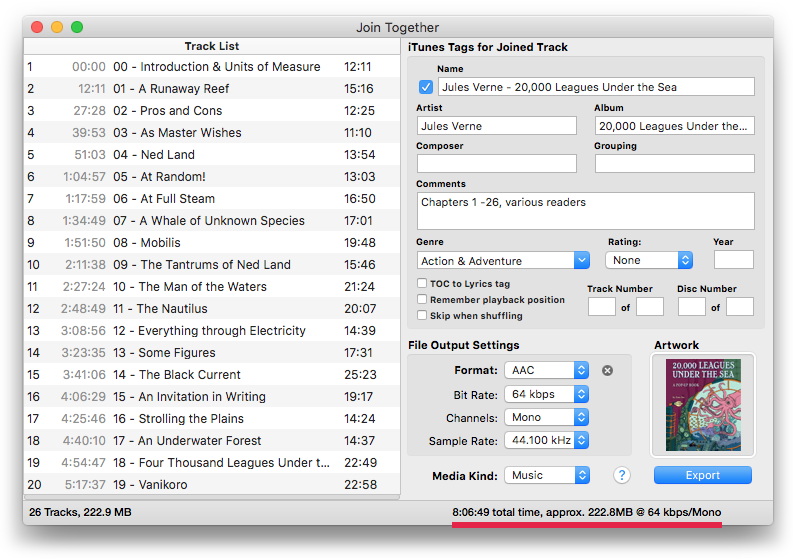 Also, since this file is only going to be used with Overcast, rather than add the final file to iTunes, you may want to use Join Together's Advanced Session Options (Option-Export) to save the final joined file to the Desktop. Once you upload it to Overcast, you can remove it from the Desktop.

When the appropriately-sized audio file has been exported from Join Together, go to the Overcast uploads webpage. Navigate to the file you created with Join Together and send it to the cloud.

Go to Overcast app. In Settings make sure "File uploads" is on. Refresh. Your uploaded file(s) should appear in "Uploads" at the top of the Podcasts section, where it will play like any podcast episode.

Just to be clear, I'm not affiliated with Overcast or Marco Arment. I just like listening to good stuff in a clever way on great iOS software.

posted in Join Together, Podcasts, With Other Apps

Join Together 7.6 will create and export a single AAC or ALAC audio file from the audio data of tracks dragged from iTunes or files dragged from the Finder, leaving the original source tracks and files intact. 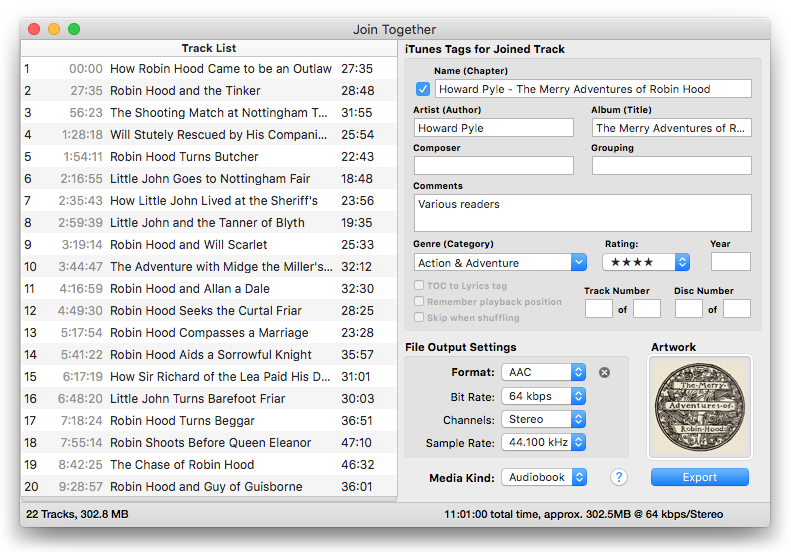 This latest version will honor an iTunes track's user-set Start and Stop Times (which are accessible in the track's Get Info > Options panel), the presumption being that the abridged version of a track is how you prefer to listen to it. But this behavior can be over-ridden in the Advanced Session Options (Option-Export) so that the Start and Stop Times are ignored and the complete duration of a track will be incorporated into the final joined track.

The unregistered version of Join Together will operate in Demo Mode during which all of its features are available and unrestricted. However, in Demo Mode the volume-level of the exported file will be sharply reduced after a few minutes and through the duration of the file. A registration code for Join Together is $5.00. This is a free update for registered users.

Join Together will create and export a single AAC or ALAC audio file from the audio data of tracks dragged from iTunes or files dragged from the Finder, leaving the original source tracks and files intact. 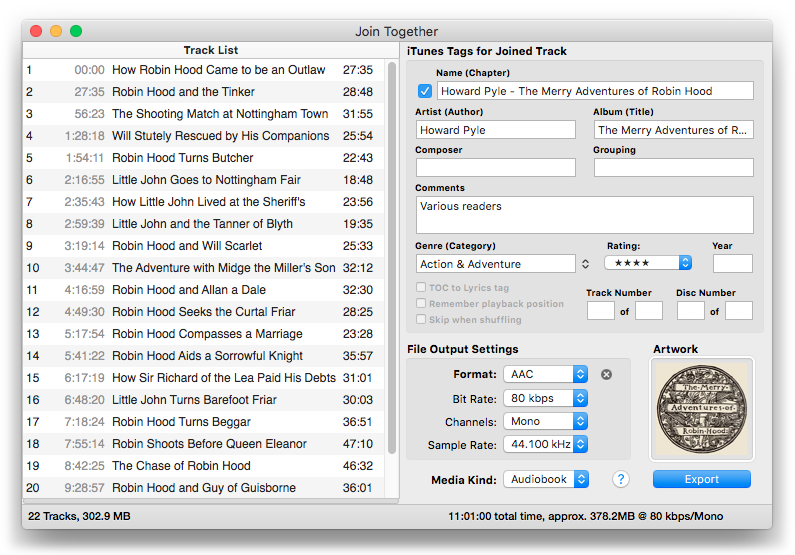 This latest version, 7.5.3, fixes a problem some users were seeing with encoding at lower sample rates, fixes an issue when using advanced Session Options and has minor performance enhancements. It's a free update for registered users.

You can try Join Together for free in Demo Mode, which will sharply reduce the volume of the exported file after a few minutes. A registration code for Join Together that removes the Demo Mode volume restriction is $5.00.

Join Together will create and export a single AAC or ALAC audio file from the audio data of tracks dragged from iTunes or files dragged from the Finder. 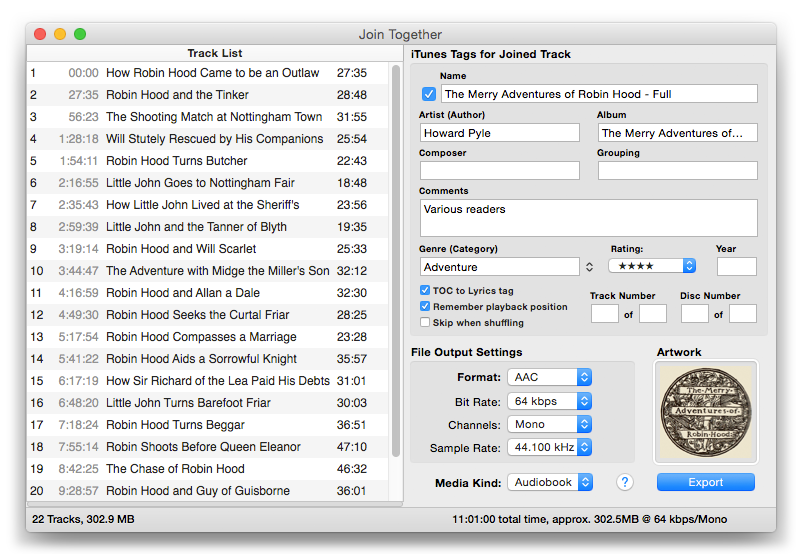 Join Together is free to try in Demo Mode during which all of its features are available. However, in Demo Mode the volume-level of the exported file will be sharply reduced after a few minutes and through the duration of the file. A registration code which will unlock the volume restriction is $5.00. This is a free update for registered users.

iTunes 12.2 introduces a new View by which to display tracks in a playlist: "Playlist". It displays a nice header with artwork from the tracks in the playlist and abbreviated tag information. I like it. 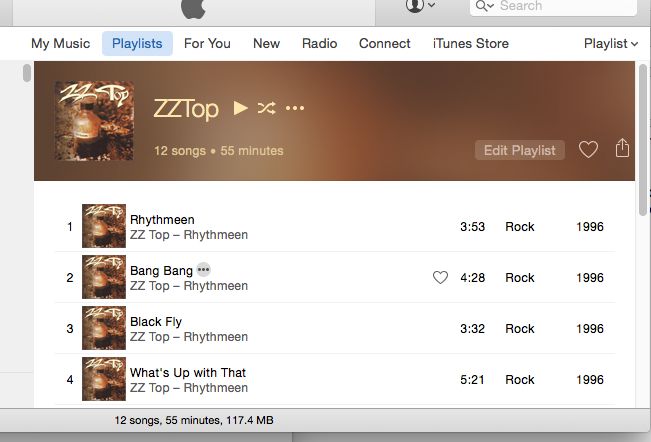 Except that there is an issue when dragging tracks from a playlist set to "Playlist" view to another drag-and-drop enabled application. The pasteboard that should contain metadata information about the tracks being dragged ("com.apple.itunes.metadata" is the name of the pasteboard type) only supplies the file paths ("NSFilenamesPboardType").

This affects my apps "Join Together", "M3Unify" and "Playlist Assist". The workaround is to either drag tracks while the playlist is in "Songs" view or drag the entire playlist by selecting its name in the Playlist Column and dragging.

I'm working on fixes for those apps.

I'm happy to announce a pretty cool update to Join Together.

Join Together will create and export a single AAC or ALAC (Apple Lossless) audio file from the audio data of tracks dragged from iTunes or files dragged from the Finder.

This latest version will accept dragged or copy-and-pasted artwork to be applied to the final joined file's metadata. Additionally, there is now support for exporting 16-bit and 24-bit ALAC files at 44.1, 48, 88.2 and 96 kHz.

Join Together is free to use full-featured in demo mode, whereby the volume level of the final joined file will be sharply reduced at the half-way point of the file. A registration code, which when entered will remove this restriction, is $5.00. More info and download is here.

Join Together will create and export a single AAC or ALAC audio file from the audio data of tracks dragged from iTunes or files dragged from the Finder. 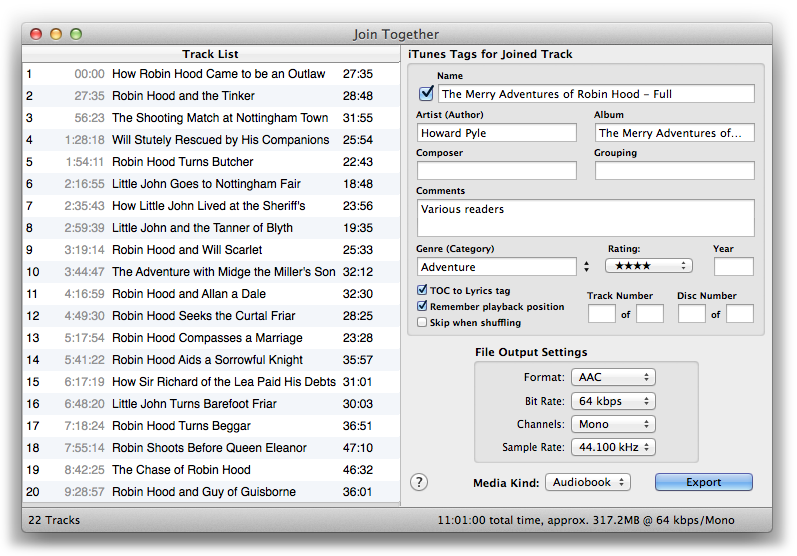 This latest version includes fixes for some memory management issues in Mavericks and later. It will work under the Yosemite beta with iTunes 12, but observe the usual caveats about pre-release beta software.

Join Together is $5.00; this version is a free update for registered users of v7.0 and later. More information and download is here.

posted in Join Together
Site contents © 2001 - 2023 (that's right: 2001) Doug Adams and weblished by Doug Adams. Contact support AT dougscripts DOT com. About.
All rights reserved. Privacy.
AppleScript, iTunes, iPod, iPad, and iPhone are registered trademarks of Apple Inc. This site has no direct affiliation with Apple, Inc.
The one who says "it cannot be done" should not be interrupting the one who is doing it.