Macworld's Dan Frakes has a great review of ScriptPal. Thanks!

Just made a couple of quick fixes to ScriptPal, now at version 1.0.1. Fixed a problem listing scripts when the "Scripts" folder has a custom icon and addressed an issue whereby the contents of application bundles with non-standard hierarchies were being displayed.

Thanks for the great feedback on ScriptPal.

ScriptPal floats a persistent HUD (heads-up display) palette above iTunes putting just the AppleScripts you need a mouse-click or two away. 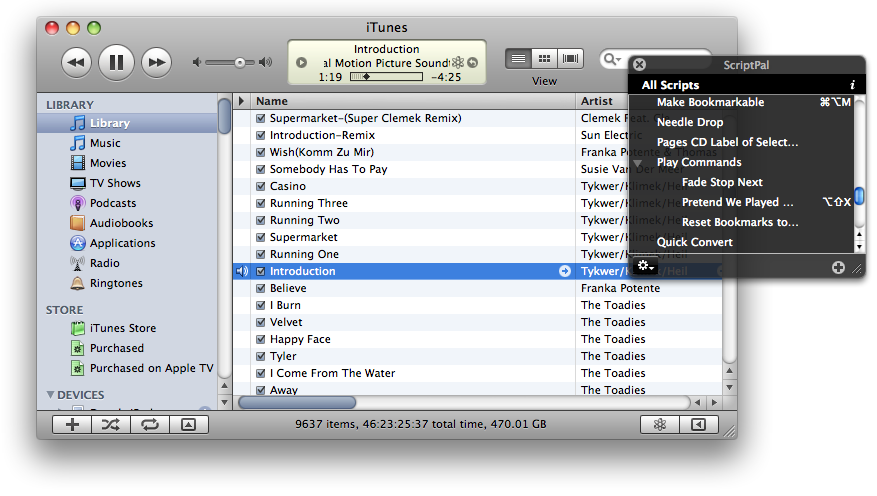 Instead of having to click and scroll through iTunes' Script menu over and over again for just the two or three scripts you need during a big job or for the handful of scripts you use most frequently, let ScriptPal keep your most-needed AppleScripts conveniently ready and able to be launched with a double-click...or edited in Script Editor with an option-click...or arranged into compact and reusable Workgroups...

ScriptPal is easy to configure and use. And it's free!

posted in AppleScript, iTunes, ScriptPal
Site contents © 2001 - 2020 (that's right: 2001) Doug Adams and weblished by Doug Adams. Contact support AT dougscripts DOT com. About.
All rights reserved. Privacy.
AppleScript, iTunes, iPod, iPad, and iPhone are registered trademarks of Apple Inc. This site has no direct affiliation with Apple, Inc.
The one who says "it cannot be done" should not interrupt the one doing it.