Every so often I like to post a Google Analytics graphic of visitors' macOS breakouts. This is from today and covers the last 30 days: 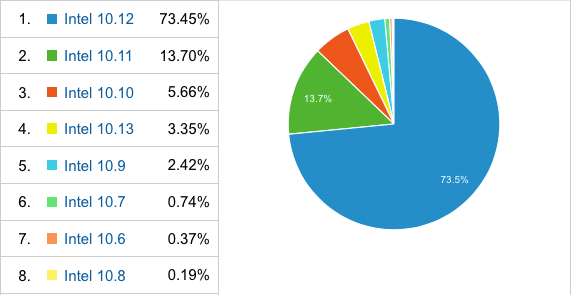 The site issues I mentioned previously are fixed. However, please don't hesitate to contact me if you experience any problems on the site. I'm still tying up loose ends. Thanks for your patience!

The site is experiencing some issues. I may be moving to a new hosting server as a result. Please excuse any disruptions or anomalies.

I was surprised when Tim Cook announced in the WWDC Keynote that 40% of Mac users are running Lion (OS X 10.7). For what its worth, here are my month-to-date Mac operating system unique visits (not pageviews) from Google Analytics:

I don't want to give the specific number of month-to-date uniques but for each stat it's over 50K.

Here are the Google Analytics stats for Mac operating system visits to my site between Lion's launch on Wednesday, July 20 and today: 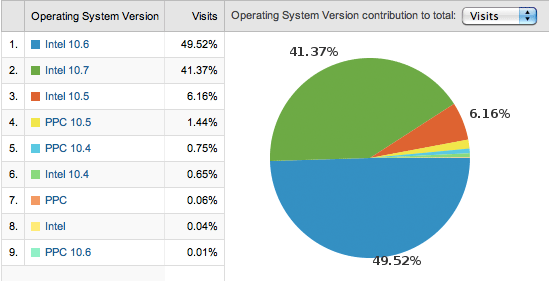 Whether you'll be updating to OS X 10.7 Lion the second you can get it onto your machine or waiting to see how things shake out, there are a few things you should probably know about the downloadable AppleScripts from this site.

1. Scripts that use PowerPC helper apps. As has been frequently mentioned elsewhere since mid-June, PowerPC-only applications will not run on OS X 10.7. There are a small number of scripts that use bundled PPC helper apps and I will gradually be rolling out updates for these scripts for use exclusively on Intel machines (running Lion, Snow Leopard, and the rare Intel machine running Leopard). The older PPC versions will still be available via a direct download link from a script's entry page; they will not be updated with new features and remain as-is. I made this decision based on stats from my traffic logs which indicate that about 3 percent of visitors to this site are on PPC machines (a number that is shrinking rapidly). Everyone else is using Intel.

2. Older script applets and droplets--those written long ago on PowerPC machines--will run on any machine but you may have to open them in AppleScript Editor and re-save them. This was an issue when Snow Leopard was introduced as well. I suspect that if you are regularly using any of those kind of scripts you have already updated them yourself. I will not be updating any of these; indeed, for the most part, I haven't had to for Snow Leopard and there aren't that many anyway.

3. Scripts designated as Universal should have no problems (unless they use a older helper app, see 1. above).

4. Scripts at end of life. Many scripts in the Retro Scripts category will be removed. I'd like to keep these old-and-in-the-way scripts posted as long as possible but some of them are just plain obsolete (CDDB Safari Kit, Search WIth Sherlock, Import SoundJam Playlist, and so on). This gives me an opportunity to clear them out.

I can't test every script and your help will be greatly appreciated. If you experience any problems with my scripts during your transition to Lion don't hesitate to let me know. Please use email; I can't keep a record of tweets.

February 15th is the anniversary date of this site and this year makes ten anniversaries. Wow, huh? Actually, I had some stuff up slightly earlier than that, but I can't Wayback much of it and the original files are probably on a Zip disc or something. Closet > Back of Closet > Milk Crate > Shoebox > Zip Discs. Like I'm going back there to even look, right?

Thanks for visiting and making it a lot of fun. I use iTunes with AppleScripts everyday and can't believe how geeked-out I still am about it.

My apologies to visitors who were seeing errors earlier today. My hosting company was having some issues. The site should be OK now.

Most all new downloads will no longer present you with a license sheet to Agree to before the disk image has loaded. Actually, this was meant to be more of an emphatic installation instruction than a license agreement. Anyway, couple Correspondents complained after downloading a hundred-milliony scripts from the site one afternoon that agreeing to the licensing sheet of each .dmg was growing tedious and they were turning into zombies. Or words to that affect.

Scripts designated as Retro Scripts do not get re-packaged so a few of those will retain the license sheet. But there aren't nearly a hundred-milliony of those.

For convenience I have provided a short URL for each script for easy bookmaring, link copying, Twitter posting, and what have you. So instead of having to copy (or even type) something like this:

Gee, that's about half the length now that I see it like that.

The short URL can be found in the script's entry listed in the "Info" section. And the title of the entry is also a link using its short URL. The permalink for each entry is, of course, still viable, but I hope you'll use the short URL when possible.

posted in Site News
Site contents © 2001 - 2023 (that's right: 2001) Doug Adams and weblished by Doug Adams. Contact support AT dougscripts DOT com. About.
All rights reserved. Privacy.
AppleScript, iTunes, iPod, iPad, and iPhone are registered trademarks of Apple Inc. This site has no direct affiliation with Apple, Inc.
The one who says "it cannot be done" should not be interrupting the one who is doing it.