Every so often I become re-enamored with my iPods. I have a 30GB "Video" iPod (5th gen) and a 160GB iPod Classic both of which still work very well. We talked about it on this episode of The Next Track podcast.

I recently heard from 3 different Correspondents within a single week who had updated their old iPods with 512GB SD cards—a procedure that I understand is very difficult.

The film "Baby Driver" has re-ignited the iPod love.

Vinyl is resurging. Cassettes are on a come-back. Could MP3 players be next?

Probably not. But, if you do still use an iPod from time to time then you might be interested in the update to Selected Playlists To iPod. 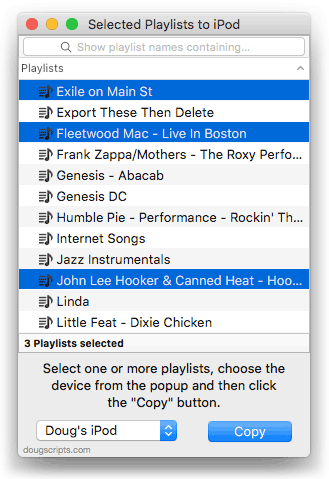 I sync music to one of my iPods, but the other is manually managed. There's an Autofill feature but I prefer to manually drag tracks and playlists to fill it up the old-fashioned way. Or use a script. Selected Playlists To iPod will allow you to select a batch of playlists in iTunes and have them copied to a connected iPod, rather than have to drag each one individually in iTunes.

This only works with "conventional" iPods—and not the iPod Shuffle. It may work with iOS devices, but iOS doesn't always buy what AppleScript is selling, if you know what I mean. The older iPod operating system works more co-operatively with iTunes.

Selected Playlists To iPod v3.0 is free to use with donation in appreciation requested. More information and download is here.

Import iPod Audio Files copies the files of the selected iPod tracks to your iTunes Music/Media folder and then adds them to iTunes. Additionally, you can assign the new tracks to their own playlist. Requires the iPod be set to "Manually manage music and videos".

Will not work on Windows-formatted iPods.

Not compatible with iPhone/iPod touch.

This latest version is a maintenance release that fixes a problem locating files and has a re-designed progress indicator.

Kirk on Sync multiple iPods to one Mac

My good friend Kirk McElhearn has an article up at Macworld on syncing multiple iPods to one Mac:

When you're alone with your iPod and your Mac, it's easy to manage your library and sync your music, videos, audiobooks and data. But with the holidays over, many family members who didn't have iPods beforehand may now find themselves the proud owners of one of Apple's music players. And when two or more people share a Mac, it gets a bit confusing. There are several ways you can sync multiple iPods to one Mac, but the easiest method is to share a music folder. Here's how you can share your music with another user on your Mac.

I normally don't comment on (or care much about) Apple business news and analysis, but how can these two stories, which both appeared today, be reconciled?

Latest version fixes a problem with a benign "Apple Event timed out" error that would appear.

Primarily for iPhone and iPod touch users, Selected Tags to Lyrics will copy any combination of Name, Artist, Album, Grouping, Composer, BPM, Comment, (Long) Description, Year and/or Bit Rate tags to the Lyrics tag of the selected tracks, such that this info will be available with a tap when the track is playing. Can append to or replace current Lyrics info.

Latest version accounts for description and long description, preferring the latter, and adds "year" and "bit rate" as options

New iPod Playlist From Selection copies selected iTunes tracks, or the tracks of a selected iTunes playlist, to a new user-named iPod playlist. Works only with iPods set to "Manually manage music and videos", and very handily when assigned an iTunes Scripts Menu Shortcut. I use Control-Command-N.

This latest version fixes an issue with intermittent copying

Lossless to AAC Workflow is a set of two scripts which assist with importing/managing Apple Lossless audio files and sending converted AAC copies to a mounted iPod set to "manually manage songs and videos".

This latest version fixes an issue with intermittent copying.

Rip To iPod v2.1 will import each enabled (checkmarked) CD track to iTunes and immediately copy it to iPod, removing the track from the iTunes library and deleting the original file, thus giving the appearance of seamless CD-to-iPod importing. You can also change your encoder on-the-fly and your Preferences-set encoder will be restored after the rip. Requires that iPod be set to "Manually manage music and videos". iPods set to sync are ignored.

This latest version fixes an issue with intermittent copying.

I never bother much with Lyrics, so I didn't realize Lyrics for the current track on the iPhone or iPod Touch could be made visible until Far-Flung Antipodes Correspondent Jon Jong queried about putting various tags into the Lyrics tag so they could be viewed instead. 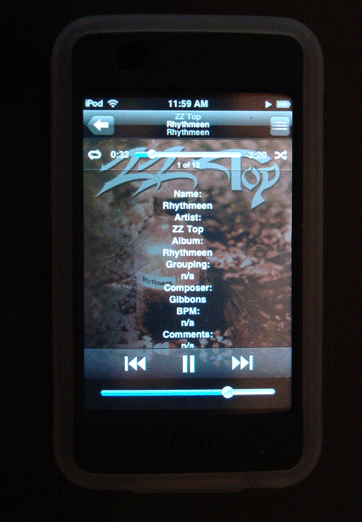 Selected Tags to Lyrics will allow you to copy any combination of the Name, Artist, Album, Grouping, Composer, BPM, Comments and/or Description of the selected tracks to the Lyrics tag of each. Tap-tap, and there you are!

posted in AppleScript, iPhone, iPod, Managing Track Info, New Releases
Site contents © 2001 - 2020 (that's right: 2001) Doug Adams and weblished by Doug Adams. Contact support AT dougscripts DOT com. About.
All rights reserved. Privacy.
AppleScript, iTunes, iPod, iPad, and iPhone are registered trademarks of Apple Inc. This site has no direct affiliation with Apple, Inc.
The one who says "it cannot be done" should not interrupt the one doing it.