Many users updating to OS 10.9.3 are reporting that their /Users folder is set to be hidden, not unlike how the ~/Library folder is hidden by default. However, this behavior is not happening to everyone, including me (but I have only updated one machine).

Perhaps needless to say: installing AppleScripts into any of the appropriate folders in the Users directory will be somewhat impeded by this phenomenon.

Bug or feature characterizations aside, if your Users folder is hidden after installing OS X 10.9.3, several people are suggesting resetting the "hidden" flag of the folder; but this flag is evidently re-set back to hidden on a restart of the machine. A relatively more thorough fix is suggested on the French MacBidouille forum and is also listed in the comments of Chris Breen's Unhiding the Users folder article at MacWorld. This fix has you reset PRAM, repair permissions, and then reset permissions on the Users folder.

Among other workarounds: From the Finder's "Go" menu click "Go to Folder..." and type in "/Users". Once open, drag the folder icon in the title bar to the "Favorites" section in the window's sidebar. The folder will continue to be hidden in the Finder but can now be accessed from the sidebar.

UPDATE: According to The Mac Observer this issue is related to having Find My Mac enabled and the iTunes 11.2 update and not specifically the OS X 10.9.3 update.

posted in Bug or Feature?, Mavericks

Track Down Purchases v2.3 will examine each track in the entire iTunes library—or a selection of tracks—for items purchased from the iTunes Store (audio, video, and audiobooks) and then sort them by either the purchaser's name or account ID into discrete playlists, eg: "Purchased by Tom Ryan" or "Purchased by tomryan@email.com".

Purchaser information is gleaned by examining the track's local file (purchase info for iTunes Match tracks in the cloud is inaccessible and cloud tracks will be ignored), which, depending on file location and access speed, may take as long a second per track. Just sayin'.

This lateset version fixes a problem for some OS X 10.9 users whereby the script would hang once engaged.

Copy Tracks to Multiple Playlists v2.2 will copy the selected iTunes tracks to one or more chosen playlists. 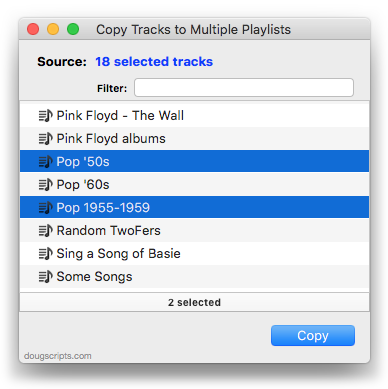 This latest version makes some tweaks for compatibility with OS X 10.9.

Some Correspondents using Mavericks are reporting that downloaded scripts are regarded as damaged by the OS. I suspect it is a codesigning issue. This doesn't affect downloading to systems before OS X 10.9. I'm investigating and testing to rule out other possibilities.

UPDATE (4:15PM): Looks like this is just affecting Remove n Characters From Front or Back v4.7. Mavericks wasn't happy with the way it was packaged. So I recompiled, rebuilt the .dmg, and re-zipped. That script should be fine now. Wish I could say I knew for certain that it's the only one affected.

UPDATE (4:45PM): Looks like Save Album Art to Album Folder, one I posted today, is also corrupted in Mavericks. I've fixed it.

Save Album Art as folder.jpg will export the artwork of the selected tracks or tracks in the selected playlist as a JPEG image file named folder.jpg to the folder which contains each selected track's file--presumably the track's Album folder. Many third-party music players and systems (Sonos, for example) may look for a "folder.jpg" here to use as display artwork. 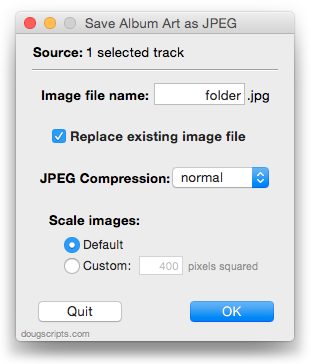 Very similar to the just updated Save Album Art to Album Folder.

This latest version makes some tweaks for Mavericks compatibility.

Save Album Art to Album Folder is one of the handful of Artwork Managment scripts suffering from a bit of trouble running under Mavericks.

This script will export the artwork of the selected tracks, or the tracks in a selected playlist, as an image file to the folder which contains each selected track's file—presumably the track's Album folder—or a specific user-selected folder. If multiple album tracks are selected, the script will make sure only one artwork file per Album is exported. 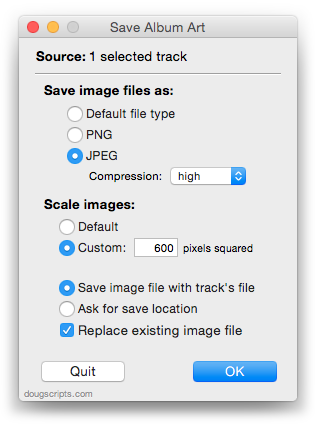 This latest version fixes the problem with Mavericks and makes some minor maintenance tweaks.

Some of the newer Artwork Management scripts will fail in Mavericks. They each use a routine that dumps artwork to a file which doesn't work very well under OS X 10.9:

tell application id "com.apple.iTunes" to write (get raw data of artwork 1 of theTrack) to fileRef starting at 0

iTunes will give up an error like this: "AppleEvents/sandbox: Returning errAEPrivilegeError/-10004 and denying dispatch of event rdwr/writ from process 'Save Album Art to Album Folder' because it is not entitled to send an AppleEvent to this process."

The fix is to just stuff the raw data into a variable first then write the data to the file from the variable. I'll be working this fix into all the scripts affected over the next days and weeks.

But There's Good AppleScript News, Too

While losing iWorks AppleScript support is anxiety-inducing, some great new features have been added to AppleScript in Mavericks that are pretty exciting. I've played a little with libraries and Notifications in the DPs, but haven't incorporated anything into my scripts since a few of these features are not backwards-compatible on earlier operating systems.

Don Southard has a good article at MacStories outlining the latest stuff.

Mavericks and These AppleScripts

For the most part the most recent versions of AppleScripts from this site which ran well under Mountain Lion should run fine under Mavericks.

Over the past few months, while Apple was releasing Developer Previews, I would often hear from Correspondents who had deployed one or more DPs that some scripts would not work. Invariably, however, the problem would be fixed in the next DP (filed a few bug reports myself that I saw fixed). But, as I mention whenever a new OS comes out, I can't possibly test all the scripts on the site. So, if you run across something unusual while running scripts in the release version of Mavericks then let me know.

I'm sure that over the next few weeks there'll be caveats and fixes aplenty to make.

posted in Mavericks
Site contents © 2001 - 2022 (that's right: 2001) Doug Adams and weblished by Doug Adams. Contact support AT dougscripts DOT com. About.
All rights reserved. Privacy.
AppleScript, iTunes, iPod, iPad, and iPhone are registered trademarks of Apple Inc. This site has no direct affiliation with Apple, Inc.
The one who says "it cannot be done" should not be interrupting the one who is doing it.