I'm late with posting this, but, for the record, Apple released iTunes 12.7.5 (build 12.7.5.9) on May 29. Probably contains changes for AirPlay 2. And the usual app fixes and improvements.

I've installed it today and Crossfade is still inoperative. However, several Correspondents at this Apple support page report that it may take a little while for Crossfade to work again. I don't know why that would be; perhaps some caches need to clear or something.

Apple has released iTunes 12.7.4 (build 12.7.4.76) today. It adds support for "a new music video experience" in Apple Music. I'm not sure why the app needed updating in that regard since most of that stuff is server-side. A chance for some additional mainenance perhaps. You can update through the App Store app, as usual.

Apple has released iTunes 12.7.3 with support for HomePod and improved AirPlay interface. (Update: I'm not sure I am able to detect the "improved AirPlay menu".) More as it develops.

iTunes 12.7.2 will detect if an optical drive is available on the system and if one isn't, you won't see the CD Actions settings in iTunes > Preferences... > General. Kirk has posted more details at his blog.

Apple has released iTunes 12.7.2 (build 12.7.2.58). I'm not aware of specific fixes or features. They've also posted macOS 10.13.2, which seems to resolve the problem with displaying album artwork as the file icon for audio files.

Apple has released iTunes version 12.7.1 (build 12.7.1.14) and it should be available from the App Store. Apple hasn't mentioned any specific enhancements, features or fixes.

iTunes 12.7 introduced the "Downloaded" playlist that can be made accessible in the Library section of the Sidebar. Ostensibly, this playlist contains all the tracks you have downloaded in one way or another from the Apple Store, iCloud Music Library and Apple Music. 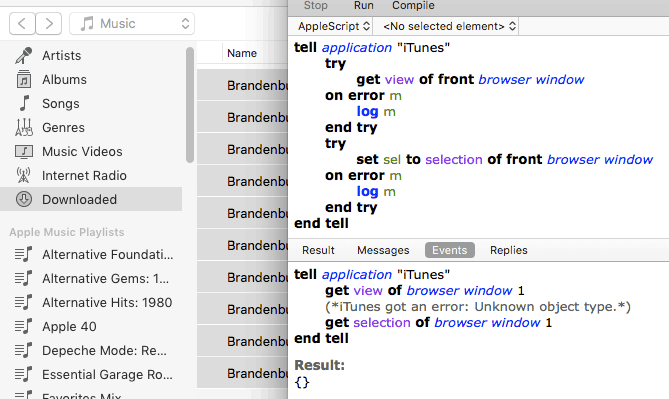 Thus, any script that needs this information to work with the Downloaded playlist will fail.

Update to an iTunes that Syncs Apps and Ringtones

Apple has somewhat relented to criticism about removing Apps and Ringtones syncing in iTunes 12.7 and has made iTunes 12.6.3 available with these abilities. iTunes 12.6.3 will install over iTunes 12.7, unlike the non-trivial process previously required to downgrade back to 12.6.2.

I suppose that for people who felt ambushed by installing iTunes 12.7 and weren't able to get their Apps and Ringtones in order, this will enable some extra time to do so. But I wouldn't want to stick around on this version. Apple has warned that 12.6.3 won't provide notifications for future updates and it presumably does not have 12.7's new features and fixes. So once you've made any adjustments (say, getting your Fabulous Ringtones Collection uploaded in toto to your devices, extricated older iOS apps and so on) you may want to upgrade back to 12.7.

posted in iTunes 12.6, iTunes 12.7
Site contents © 2001 - 2022 (that's right: 2001) Doug Adams and weblished by Doug Adams. Contact support AT dougscripts DOT com. About.
All rights reserved. Privacy.
AppleScript, iTunes, iPod, iPad, and iPhone are registered trademarks of Apple Inc. This site has no direct affiliation with Apple, Inc.
The one who says "it cannot be done" should not be interrupting the one who is doing it.