UPDATED: A Space Between v1.2

The few-seconds gap between tracks on recorded media is an artificial time. Devised to be just long enough to visually and sonically demarcate the tracks on a space-limited side of LP vinyl, the gap carried over to tapes, CDs and digital. It is unlikely that musicians playing a gig would pause such a short period of time before launching unto their next number...for every single number. Even so, we're accustomed to the two-second rule when listening to recorded media. (And cross-fades? Utterly unnatural.)

A Space Between will play the tracks in the selected playlist and wait a user-entered number of seconds between tracks. 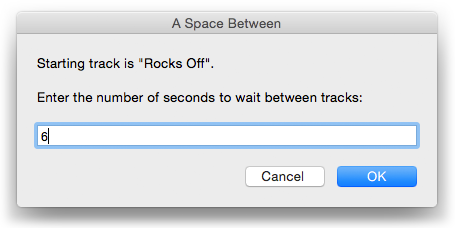 I've found that six to eight seconds of silence between tracks can be quite refreshing, especially between longer contiguous album tracks. But it adds something to the atmosphere of a mixed-track playlist, too.

This latest version of A Space Between is a maintenance update with a few minor performance tweaks.

posted in Controlling iTunes
Site contents © 2001 - 2021 (that's right: 2001) Doug Adams and weblished by Doug Adams. Contact support AT dougscripts DOT com. About.
All rights reserved. Privacy.
AppleScript, iTunes, iPod, iPad, and iPhone are registered trademarks of Apple Inc. This site has no direct affiliation with Apple, Inc.
The one who says "it cannot be done" should not be interrupting the one who is doing it.