The newest version of List MIAs for the Music app will not only display information about the files no longer associated with tracks in the library, it can also delete those "dead" tracks, which is what Super Remove Dead Tracks did (and can still do if you're using iTunes).

For the purposes of illustration, I Trashed some files for this screenshot: 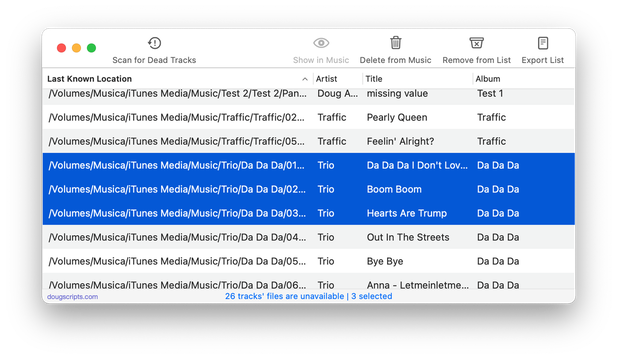 That column on the left displays where Music thought I last left each file; but those files don't exist anywhere because I've already emptied the Trash. Now, I can have List MIAs simply delete all or a selection of those tracks.

List MIAs is free to use in Demo Mode, during which several features will be disabled: Delete Dead Tracks from Music, Reveal Selected Track in Music, Toggle Scan at Launch and performing a scan more than once per launch are inhibited. A registration code to unlock these features is US$2.99.

posted in Catalina, Managing Files, Music app
Site contents © 2001 - 2020 (that's right: 2001) Doug Adams and weblished by Doug Adams. Contact support AT dougscripts DOT com. About.
All rights reserved. Privacy.
AppleScript, iTunes, iPod, iPad, and iPhone are registered trademarks of Apple Inc. This site has no direct affiliation with Apple, Inc.
The one who says "it cannot be done" should not interrupt the one doing it.