I got the first batch of some Catalina-ready artwork management scripts posted today. The four scripts are:

Save Album Art to Album Folder v6.0 will export the artwork of the selected tracks (or the tracks in a selected playlist) as an image file to the folder which contains each selected track's file--presumably each track's Album folder--or a single user-selected folder. 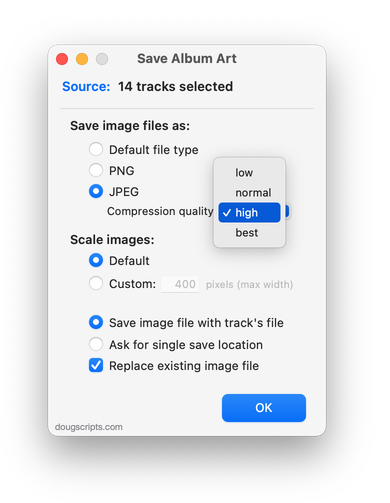 Save Album Art as folder.jpg v4.0 will export the artwork of the selected tracks or tracks in the selected playlist as a JPEG image file named folder.jpg to the folder which contains each selected track's file--presumably the track's Album folder. Many third-party music players and systems may look for a "folder.jpg" here to use as display artwork. 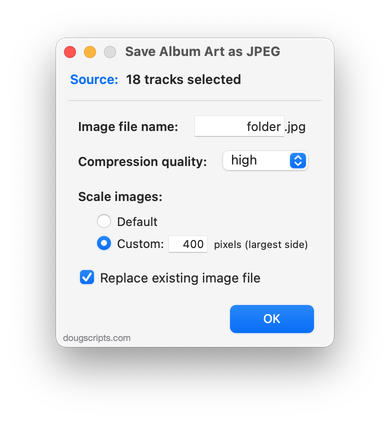 Drop and Export Artwork v2.0 Drag-and-drop one or more audio files that contain embedded image metadata to export the image data as a JPEG or PNG file named using tag metadata from each file. Has options to save image files with the source audio files or as a batch in a single user-selected folder. 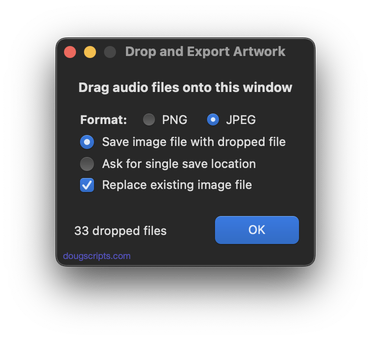 Restore Artwork from Album Folder v4.0 will look for an image file in the parent folder of each selected track's file--presumably its Album folder in which you have previously placed an image file of some sort, perhaps using one of the scripts above--and apply the data from that image file as artwork for the track.

posted in Catalina, Managing Artwork
Site contents © 2001 - 2021 (that's right: 2001) Doug Adams and weblished by Doug Adams. Contact support AT dougscripts DOT com. About.
All rights reserved. Privacy.
AppleScript, iTunes, iPod, iPad, and iPhone are registered trademarks of Apple Inc. This site has no direct affiliation with Apple, Inc.
The one who says "it cannot be done" should not be interrupting the one who is doing it.