Here's a simple script that was inspired by a question Kirk got asked in his Ask the Tunes Guy column in Macworld last week. A user lamented that the playlist length (that is, its total time) is not available in the Music app on iOS. Kirk recommended adding this information to the playlist name in iTunes and then re-syncing. A good solution but kind of a chore. This script will do the renaming part for you.

Just select a playlist in iTunes and launch the script. It will display a confirmation dialog and then rename the playlist by appending the time length to its current name:

if special kind of thisPlaylist is none then

if n does not contain "|" then return n

Couple of things to note: only user-created scripts (plain and Smart) can be affected. Also the script uses the "pipe" character to separate the actual name with the appended data. When you run the script again on a playlist that has previously been affected by the script, it uses the "|" as a marker to erase the appended text; thus, the playlist name can be updated if the contents changes at a later date. So, if you happen to already use "|" in your playlist names you may have a problem. You can edit the script in Script Editor to change each of the occurrences of "|" to some other text character that you aren't likely to use.

While some applets and all apps from this site have a menu command to "Check for Update...", many AppleScripts do not. To make it easier to check if a script you downloaded at one time or another has a newer version available, use Doug's Check For Update. Just drop an AppleScript file on it (or launch it and use an Open Panel to navigate to a specific script) and it will check the website for the latest version of that script: 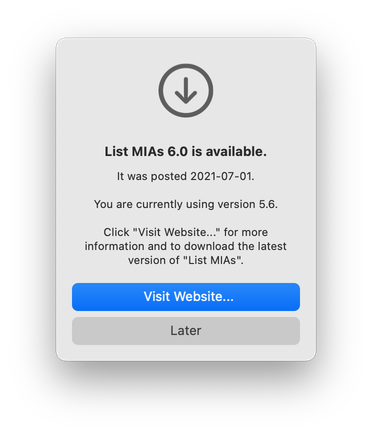 Sure, it'd be great if I could include a Sparkle-like mechanism to automatically check and install updates—as my apps do. But the code required to do so would just add too much overhead to a—very likely—simple AppleScript.

"10 things that iTunes does right"

Get Asked This A Lot

"Do you have any scripts that work with iCloud Music Library/iTunes Match tracks? Like, to delete the cloud uploads and re-upload tracks?"

No. AppleScript cannot access anything in the cloud. Here's one of the reasons why: While it's certainly possible for me to write a script that arbitrarily deleted local tracks and files on your computer (with or without your knowledge), that's OK because presumably you knew stuff was going to get deleted by running the script. It's your responsibility, and Apple doesn't care what you do on your machine. You could set in on fire if that's what you wanted to do. Or install Flash. However, stuff in the cloud is Apple's responsibility. And they have pretty much guaranteed you that your goods up there are safe. So they're not going to let an AppleScript (of all things!) have arbitrary access to your goods in the cloud where it could potentially be a bad actor.

AppleScript can manipulate cloud tracks locally; for instance, copy such tracks to a new playlist or edit their tags. But anything to do directly with the cloud is strictly out-of-bounds.

I have already noted the new loved properties for tracks and playlists. I must admit that an update to the iTunes sdef was heartening (pun not much intended). However, there are some lingering issues and new issues with the latest incarnation of iTunes. Perhaps they have yet to be got to. Yeah, that's it. They'll fix it, fingers crossed.

Pretty much anything to do with the Apple Music tabs is off limits to AppleScript. So, for example, you can't select a track or playlist in "For You" and get info about it or manipulate it. I don't mind this so much. Once tracks are added to "My Music", they are accessible as shared tracks. It'd been the same with iTunes Match tracks. You can get and set the conventional track properties, you just can't access file metadata because, by definition, there are no local files for tracks in the cloud. Still, access to tracks and playlists in "For You" and "New" might be convenient, if even for accessibility purposes.

I am disappointed that current track does not work with playing Apple Music tracks (if playing from within the "For You" tab). I'm not sure if there's a security issue here, or it's just not hooked up yet. Definetly screws up anything watching for current track to change. Notifications is aware of playing Apple Music tracks, so why not AppleScript? Even as read-only. I'd be cool with that.

The new Playlist view doesn't seem quite hooked-up yet either. This is the new default view for local playlists. Anyone who's ever worked with broadcast automation will note that the abridged track information in Playlist view is reminiscent of a music log. (Note to Apple: please let us change this default view. As much as I really like the Playlist view I prefer Songs view as default to work with track tagging and only switch to Playlist view on formal occasions.) AppleScript-wise, it's all OK. But the reason I don't think it's hooked-up properly yet is by observing the pasteboard data from a playlist in Playlist view. Now, pasteboard data for dragged tracks and playlists typically contain metadata about the playlist and tracks being dragged. Except when the drag originates from a local playlist in Playlist view. In such cases, only the file paths are available in the pasteboard. And if cloud tracks are included in the drag, well, they don't have local files, so nothing about them at all appears in the pasteboard. However, when the very same playlist is in Songs view, the metadata is available from the dragged tracks' pasteboard as expected. So the data is already permissibly available, just not (yet?) in Playlist view. I suspect that, because it seems to be the same view used in "For You" when you play a playlist there, it has no provision for includiing metadata. Someone should get on that.

Also, there's no AppleScript way to access the artwork(s) or description that is a part of the new playlist header. It would be convenient to be able to script a playlist's description at least.

Many of my scripts and apps access the iTunes Library.xml file to get information about tracks and playlists. That's what it's there for. iTunes 12.2 has, uhm, mucked around with the format of this file. As a result, there's been a big scramble by all of us who develop iTunes apps to re-jigger our stuff. The XML now contains information about mobile apps, Ringtones, iTunes LP, iTunes Extras, and books. The "Master" playlist has a name of "####!####" where it used to be "Library". "Smart Info" and "Smart Criteria" keys are now being used with playlists other than the Smart variety. Additionally, there is now no way to tell the difference between Genius and Smart playlists; they look identical in the XML. Previously, a Genius playlist would key the persistent ID of its seed track and this would be a differentiating factor. But the "Genius Track ID" key is gone.

The new "Share iTunes Library XML with other applications" Preference setting is still a mystery to me, but I suppose there could be situations whereby you'd want this off. Sometimes I'm just plain dumb about things like that. But because some users think it looks like the perfect thing to uncheck I've needed to include a check for access to the XML at the start of many apps. Because if it's off, the script or app won't work.

On the bright-side though, despite the Apple Music considerations, iTunes still has pretty robust AppleScript support! So thanks for that, Apple.

Chuck Joiner invited me to join him on his MacVoices podcast. We talk about iTunes and AppleScript (of course) and obsessive-compulsive music organization, among other topics.

But There's Good AppleScript News, Too

While losing iWorks AppleScript support is anxiety-inducing, some great new features have been added to AppleScript in Mavericks that are pretty exciting. I've played a little with libraries and Notifications in the DPs, but haven't incorporated anything into my scripts since a few of these features are not backwards-compatible on earlier operating systems.

Don Southard has a good article at MacStories outlining the latest stuff.

Apple has effectively killed AppleScript support in its latest versions of the iWorks apps. Probably not a surprise but a shock just the same. It's not a surprise because AppleScript support in Pages.app et al has never been very glamorous. But I don't have any doubts that the main consideration is the big part the iWorks apps play in Apple's iCloud/iCloud.com stategy and the security ramifications thereof. Anything that touches iCloud is pretty much hands-off to AppleScript.

Inter-app automation on iOS. Now that would cheer me up. There's hope, right?

With OS X 10.9 Apple takes security more seriously than it ever has. In this regard, Apple has added an additional level of security for apps that access the Accessibility API via "System Events". Here's how that new level of security may affect the way you use some AppleScripts downloaded from this site.

To do this the script targets "System Events" to check for an accessibility property of the iTunes user interface indicating whether or not full screen is on. "System Events" is in the purview of Accessibility. If you've ever used GUI Scripting—to script key codes for example—you've had to set "Enable access for assistive devices" in the Accessibility pane of System Preferences. Well, as of OS X 10.9, this is no longer a global setting and must be set on a per-app basis.

END_OF_DOCUMENT_TOKEN_TO_BE_REPLACED

There's seems to be a bit of inconsistency with the way iTunes 11 displays playlist time information as DD:HH:MM:SS. Sometimes times are displayed in the Status Bar at the bottom and sometimes a decimal version will be displayed beneath the playlist's name at the top of the browser. I can't quite get a grasp on something like "7.6 days" though.

Here's a script you can attach a shortcut to that will simply display a dialog box listing the name of the selected playlist, the number of tracks it contains, and the time of the playlist as DD:HH:MM:SS: 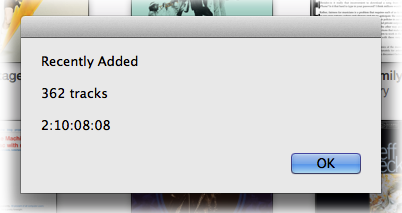 set thePlaylist to (get view of front browser window)

posted in AppleScript, DIY, iTunes 11
Site contents © 2001 - 2022 (that's right: 2001) Doug Adams and weblished by Doug Adams. Contact support AT dougscripts DOT com. About.
All rights reserved. Privacy.
AppleScript, iTunes, iPod, iPad, and iPhone are registered trademarks of Apple Inc. This site has no direct affiliation with Apple, Inc.
The one who says "it cannot be done" should not be interrupting the one who is doing it.