The browser window property minimized has been removed ("is the small player visible?"). This was related to the old behavior when minimizing the main window would switch to the miniplayer. Good times. I seem to recall this mechanism had different behaviors in various versions of iTunes. Anyway, not needed since the "small player" can be detected using the new miniplayer window class.

Of course, the script below is still serviceable.]

Looks like the "Reset Plays" command is MIA in iTunes 12.4. Here's a script that will reset the played count of each selected track to 0 and remove its played date.

if sel is {} then return -- nothing selected

-- use try blocks to fail gracefully if problem

Click on the script icon to open this in Script Editor on your machine. From Script Editor's File menu, click "Save...". In the Save Panel, enter a name for the script, like "Reset Plays", and save it to your [username]/Library/iTunes/Scripts/ folder (if no "Scripts" folder exists, create one). Once saved to this folder, the script will appear in iTunes' Script menu. To use, select the track(s) in iTunes whose plays you want to reset and then choose the "Reset Plays" script in the Script menu.

A more advanced version of this script is available as a download from this page.

Alternatively, you can use Add or Subtract Play Count, New Last Played Date, or New Play Count. Each has some capacity to change a track's Plays.

There still seems to be a bug regarding changing the Plays of Matched/Uploaded tracks in the cloud, whereby the played count reverts to whatever it was before being "artificially" set with AppleScript (or other means). I couldn't say if that issue is related to the disappearance of "Reset Plays".

play -- initialize the state to Play

Attempting a workaround, I found that as long as the track isn't paused, the player position can be set.

This did not occur in previous versions; setting the player position while paused would, as expected, move the play head to that position. In fact, Needle Drop uses a variation of this to begin playing a track at a user-set start time. Needless to say, this won't work with iTunes 12.4. (Hat-tip to Correspondent Rob Robinson.)

The AppleScript issue in iTunes 12.4 whereby filtering special kind by Music fails is caused by a conflict with the new media kind property. One of the values it uses is music. 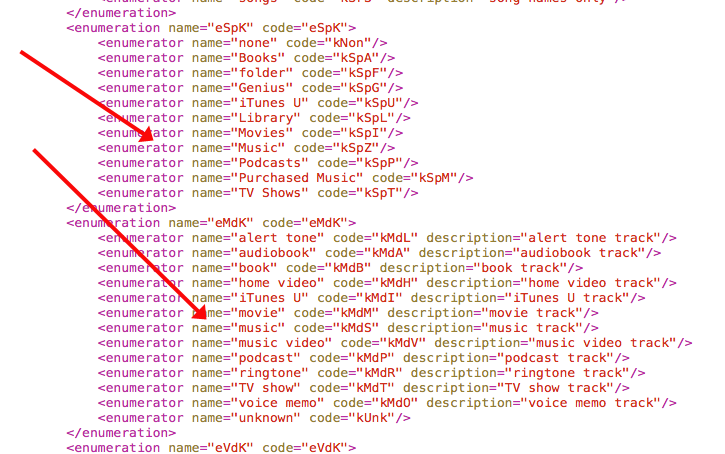 Bugs are being filed. (Hat-tip to Correspondent Nate Weaver.)

Apple's refresh of the iTunes interface in the latest version and the addition of new AppleScript properties has lanced any anxiety I had about the future of file handling and the future of iTunes AppleScripting. In short: I think we're good for a while.

There's been a lot of chatter lately about Mark Mulligan's projection numbers that suggest Apple could shut down the Store sooner than later. Hot on the heels of this portent was deletegate. Suddenly, iTunes was doomed, your music collection could evaporate, and the Hellmouth would consume us all.

I don't believe Apple would have gone to the effort of adding so much new AppleScript stuff if the roadmap pointed to dropping AppleScript altogether anytime soon. And by the same token, those of us who still rely on iTunes to manage our media files (as opposed to going all-cloud, all the time) can be encouraged by the addition of—for example—the file-related purchaser and downloader properties.

So, while the cloud and streaming are certainly going to be part of the iTunes/Music.app experience, I'm confident that we old-schoolers can still Rip-Mix-Burn easy.

Finally, What select Does

The new select command is evidently used to bring a visible but obscured window to the front. The browser window, miniplayer window, EQ window and video window can receive a select command.

The Return of shuffle and repeat

The shuffle commands are now application properties. Back in the day, each playlist could be set individually via AppleScript to shuffle and/or repeat. Those were deactivated when playlists were re-vamped under iTunes 11. At the time, shuffle and repeat became global settings and were no longer 'scriptable.

Well, they're back. But not for individual playlists, just as global settings. The new properties are shuffle enabled (taking true or false as values) and shuffle mode (songs/ albums/ groupings). The new song repeat property takes the old off, one, and all parameters.

[UPDATE: To be clear, the obsolete shuffle and song repeat have been removed as playlist properties.]

In iTunes 12.4, I can't get a reference to the Music library playlist by doing this:

set musicPlaylist to (get some playlist whose special kind is Music)

set musicPlaylist to (get some playlist whose special kind is music)

...and the script fails. A lot of my scripts use this to target a particular media library, like Music or Movies.

I suspect, (maybe? perhaps?) that the new select command is related? But, until now, I haven't been able to get any object to react to select. More as it develops.

UPDATE: Well, this works (coercing the value of special kind to text), but it shouldn't have to be done this way:

repeat with aP in nonSpecial

if (special kind of aP as text) is "Music" then

UPDATE ALSO: Correspondent Nate Weaver tweeted to remind me that the event code «class kSpZ» can be used instead of the boinked Music value.

Like current track, current playlist will recognize an Apple Music playlist. Should have mentioned that before, eh? While you can get properties of cloud tracks and playlists—say, the description of a For You playlist—you cannot change them.

posted in iTunes 12.4
Site contents © 2001 - 2022 (that's right: 2001) Doug Adams and weblished by Doug Adams. Contact support AT dougscripts DOT com. About.
All rights reserved. Privacy.
AppleScript, iTunes, iPod, iPad, and iPhone are registered trademarks of Apple Inc. This site has no direct affiliation with Apple, Inc.
The one who says "it cannot be done" should not be interrupting the one who is doing it.