For macOS 10.15 Catalina and later only. This stay-open applet watches your playing tracks and when one begins playing displays a notification-sized panel whereby a rating for the track can be entered. Features options to display only unrated playing tracks and timer preferences for how soon and how long the panel is displayed.
While you could easily rate the current track from the Music app's icon in the Dock, this script interrupts you and compels you to do so.

More information for Rate Me! Rate Me! v 6.0 and download link is here.

Set the Plays of the selected tracks to a user-entered value (they will all be set to the same value). If this value is 0 then the Last Played date of each track will be erased. (The Music app has the ability to "Reset" Plays to 0 from a track's Show Info window.)

More information for New Play Count and download is here.

For macOS 10.15 Catalina and later only. Add or subtract a user-entered number from the current Plays of each selected track. If the resulting Plays is 0 then the track's Last Played date will be erased--as if it had never been played.

More information for Add or Subtract Play Count and download is here.

For macOS 10.15 Catalina and later. Set Last Played/Last Skipped date of selected tracks to a new date, with option to increase or decrease Plays/Skips, or set to no date and no Plays/Skips. 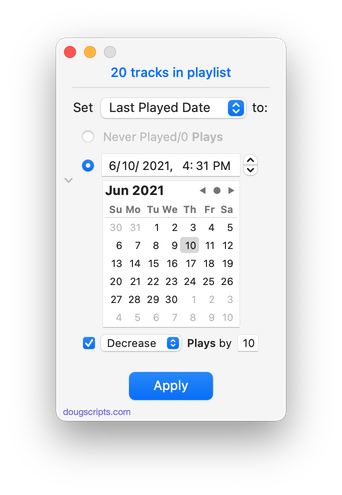 This script will reset the Plays, Last Played, Skips, Last Skipped, Remember Playback Position and Played properties of the selected tracks to default “never played” values. Music's own "Reset" command in a track's Info window may not be as thorough.

This latest version makes accommodations for macOS 10.15 Catalina and the Music app.

More information for Reset Plays and download is here.

It may be somewhat ironically serendipitous (or serendipitously ironic) that CD Text to CD Info v5.0 happens to be the first script I've posted specifically for the new Music app. Afterall, ripping audio from a CD seems quaint in the current age of streaming. But facetious jibes like "What's a CD? LOL!" aside, there are still plenty of CDs in the world that haven't been ripped yet and plenty of people who want to do the ripping. Thankfully, Apple has preserved this ability in the Music app.

CD Text to CD Info v5.0 will examine the selected CD mounted in Music for CD-Text and apply the album and track information to the CDs tracks. In this screenshot of the script's main window, all of the information (except disc number/count and year, which I entered manually) is from the CD's CD Text: 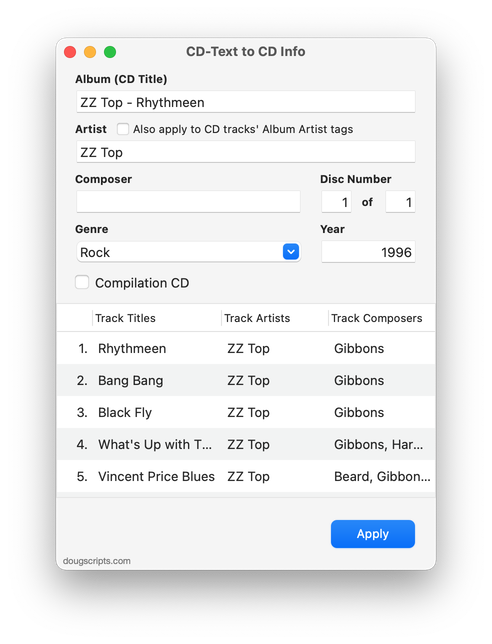 This is from a CD that I burned years ago in iTunes, which allowed me to include CD Text. Not all CDs contain CD Text, but many do. It would have solved a lot of metadata confusion if the music industry had insisted that CD Text be a mandatory Red Book standard from Day 1, but That's The Way It Went.

As I mentioned at the top, CD Text to CD Info v5.0 will only run on macOS 10.15 Catalina with the Music app, which are both currently in beta (the version that works with iTunes is still available here).

I got a request from a DJ'ing Correspondent who had been manually changing some of his tags to all caps so they'd be easier to read on the decks under dim dance floor lights. (Are they still called "decks"?)

Anyway, to put a finer point on it, he sent me a snap of his handiwork: 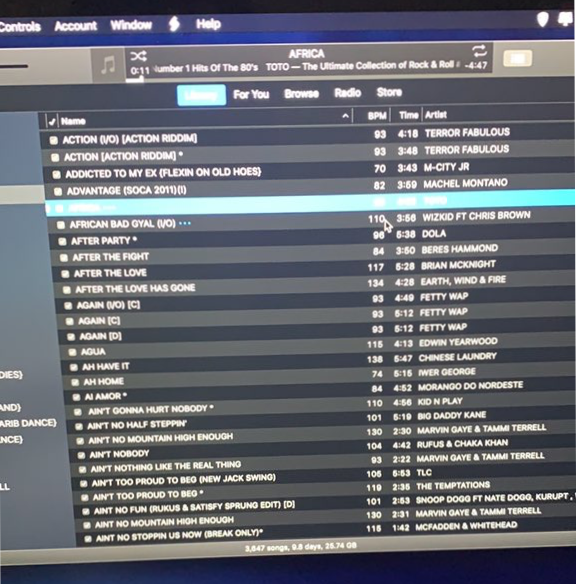 Frankly, I don't think I had ever seen this done. And it reminded me of these: 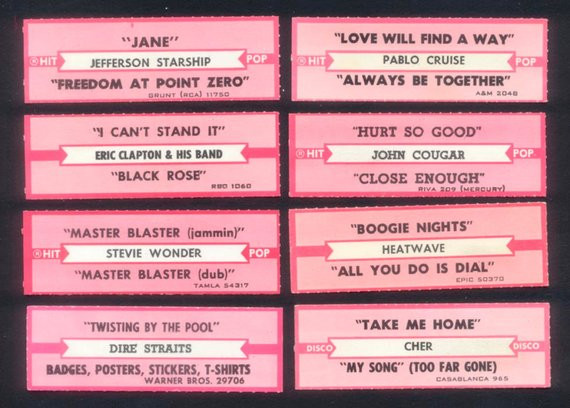 iTunes is, afterall, "jukebox" software. These are called title strips and are probably familiar to anyone who has ever seen a jukebox in a diner or the like. And for the most part the text was always all caps.

Manually changing the case of track tags in iTunes must have been painful.
Make Tags All Caps will change the text in your choice of the Name, Artist, Album, Comments and/or Composer tags of the selected iTunes tracks to ALL CAPS quickly. 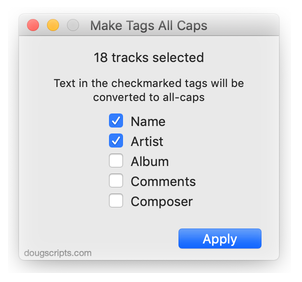 The name of this script sort of looks like a word salad, now that I've enetered it as the title for this post. Oh well, it makes perfect sense.

A track's rating property is actually a number value between 0 and 100. iTunes creates the rating stars in its interface by converting this value into graphical stars and half-stars: v div 20 = number of stars and if (v mod 20 = 10) then add half-star.

To the vexation of some iTunes users, a track's rating value does not get written to its corresponding file's metadata. So if you're depending on a rating tag showing up in some other app in which you use your audio files (such as some DJs are) you have to figure out some other way of getting your iTunes track ratings to "travel" with your audio files.

An easy solution is to convert the rating value to Unicode text stars and dump it to some non-essential or lesser-used text tag—one that does get written to metadata by iTunes. And that's what Copy Rating Stars to Other Tag does: 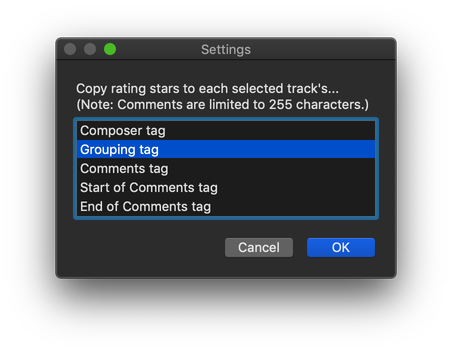 After running the script against a few tracks, copying the stars to the Composer tag, the metadata for the file should look something like this (as seen via Show Me The Metadata): 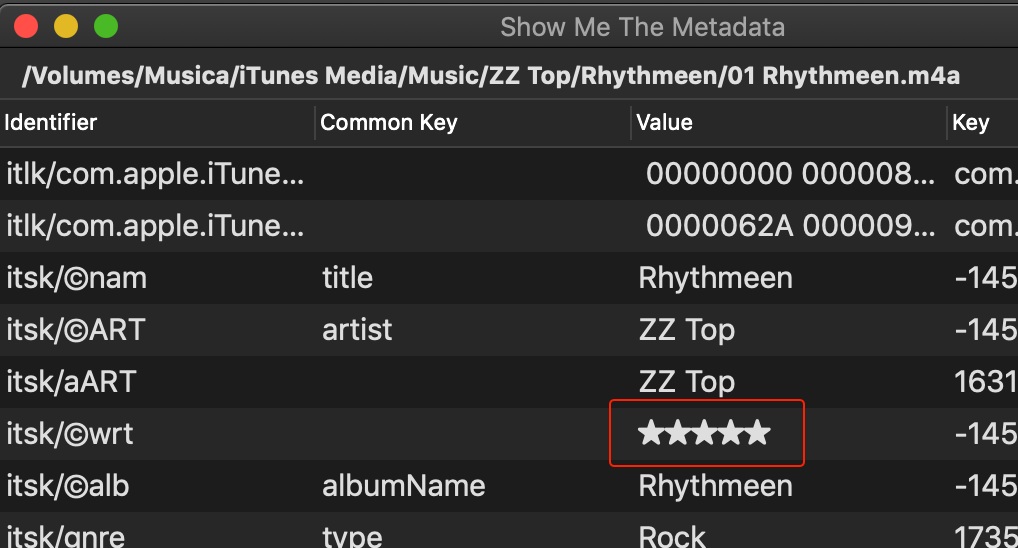 ...and when the file is added or refreshed in another app, the text stars will display in that track's Composer field.

Presumably, DJs don't much care about Composer, Grouping and so on (title and artist, of course, and perhaps year and genre), so these tags may be available to accommodate ratings.

In fact, it was DJ'ing Correspondent who asked that I include Composer as an option in the initial version of Copy Rating Stars to Other Tag, and thus, this update.

For a brief time, back when I was radio DJ, a station I worked at experimented with using "key segues", whereby a recorded sounder would transition from a song played in one key to a song in another. Thus: Song in C fades -> sounder transitions from C to A minor -> seg next Song in A minor.

Anyway. Since I was an Actual Musician (few and far between in radio), it was my job to assign the correct key for each song we played. Which essentially meant that I sat in a studio a couple of times a week with a CD player and a Casio keyboard and diddled around until I determined the key of each song we added that week.

Nowadays, a lot of DJs use the musical key of the tracks they play to create "harmonic mixes"; tracks are mixed or segued according to harmonic rules. Some DJs probably aren't musically inclined either, so there is software and databases and such that can supply the key for their tracks. Then all they have to do is check the Camelot chart to see what might sound good.

(This, of course, is not perfect, since pitches can vary. Which is what made my old station's experiments with key segues so cringey. We had CD players that could adjust for pitch, but nobody wanted to spend that much time on creating perfectly harmonic segues. But, whatever.)

I heard from a Correspondent who uses this system. He has the Camelot codes in his iTunes tracks' Comments tags. These are codes that represent 24 musical keys and look like this: 1A, 2A, 3A...10B, 11B, 12B:

He wants to convert the Camelot codes to the actual key. So here is a script that will do that: END_OF_DOCUMENT_TOKEN_TO_BE_REPLACED 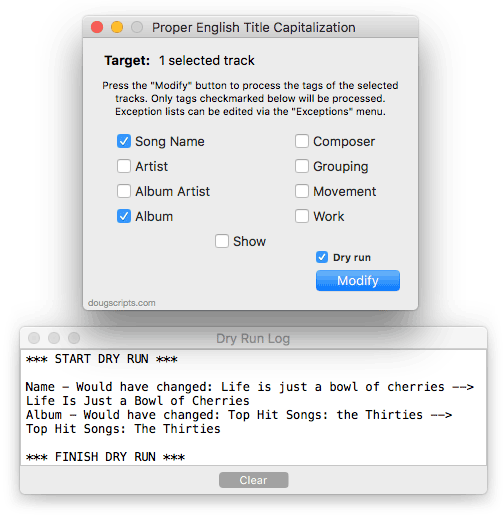 posted in High Sierra, Managing Track Info
Site contents © 2001 - 2020 (that's right: 2001) Doug Adams and weblished by Doug Adams. Contact support AT dougscripts DOT com. About.
All rights reserved. Privacy.
AppleScript, iTunes, iPod, iPad, and iPhone are registered trademarks of Apple Inc. This site has no direct affiliation with Apple, Inc.
The one who says "it cannot be done" should not interrupt the one doing it.