Skip Back or Ahead Custom Mods

Recently, I was watching a DVR of a football game I had made with EyeTV. In general, I prefer to skip the parts that aren't showing football players playing football. So, while watching the game on iTunes I used the script Skip Back or Ahead to jump ahead 120 seconds when necessary. 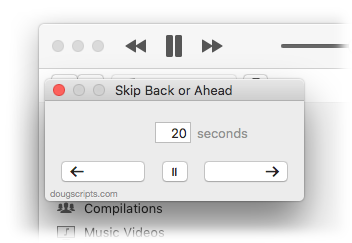 The thing about that script is that I didn't exactly streamline the workflow. Here are the steps required to skip ahead 120 seconds:

...and then the playing iTunes track, my football game, advances two minutes. But although it looks like just three quick steps it seems to take about a half an hour to perform. OK, not a half an hour. But it does seem kinda clunky to have to do a lot of mousing and key pressing just to perform a simple task like skipping ahead.

Here's what you can do to streamline the script at your house.

END_OF_DOCUMENT_TOKEN_TO_BE_REPLACED

You probably know that you can use iTunes' Print command to create CD box labels and stuff, which I'm guessing not many people need much any more. You can also print a list of all your Albums, sorted by Artist. Big whoop? Well, instead of printing it to paper, use the PDF Service in PDF Adder to add the listing as a PDF to iTunes' Books library. It syncs to the iBooks app on your iPhone or iPad, too, so you can keep a portable list of all your albums with you. Update it once a month or so. Mine came to thirty-two pages! (Gotta work on my iPhone Cross-Country-Ski-Fingers Speed Scroll technique.)

BTW: I was reminded of album list printing when I heard Kirk chatting with Chuck Joiner about his new book, Take Control of iTunes 10: The FAQ (which will also sync nicely to your iBooks app).

posted in Books, Tips and Info

Migrate Your iTunes From Windows to Mac

I frequently get asked if there is an easy way to move an iTunes library (files, playlists, ratings, and all) from a Windows machine to a Mac. My friend Kirk McElhearn has written it all down in this how-to at Macworld.

Size of Files, Size of Library

It's not the size of your "iTunes Media" files that best describes how big your media file collection is. Often, querying Correspondents will report that their iTunes Media folder is so many GBs (or so many days-worth). But if that total includes a lot of video then the number of files is smaller than the same-sized folder containing just 128kbps audio files (eg: my "Star Trek" with Extras at 6GB+ is a little smaller than my "Compilations" folder which contains over a thousand files). Very few of my scripts and apps directly work on the files in the iTunes Media folder anyway, so in many cases its size is irrelevant; scripts work with tracks in iTunes, so the number of tracks is more important than the size of their files. A better relative measurement for comparison purposes is the size of your "iTunes Music Library.xml" file (located in ~/Music/iTunes). It has an entry for each track in your library and all (well, most) playlists. Therefore, the more tracks and playlists you have the larger the XML file will be.

I've gotten several emails lately inquiring about scripts and apps that can assist with gathering up far-flung files from old music folders. It's the sort of thing that happens when you move to a new computer, upgrade iTunes, and add hard drives without doing the requisite housekeeping at the time (or on a regular basis). This is fairly typical:

Throughout the last 4-5 years, IÊ»ve ended up with an enormous bunch of music which is all on one of my hard drives, and IÊ»d like to consolidate all of it, get rid of the dupes, junk/damaged recordings, etc. For instance, some of the data are backups of my old iTunes libraries that I created before upgrading to newer versions. I like the way the script addToLib works. but IÊ»m looking for a way that I can accomplish the same thing without moving the music from each album folder, and then Trashing each folder individually.

I've been recommending using Music Folder Files Not Added which allows you to scan a folder any number of folders deep for files not in the iTunes database and optionally add them. Of course, you may still want to Trash the folder once the files are added—and this presumes you have "Keep iTunes Media folder organized" set—but you'll only have to move the single parent folder to the Trash and not dozens of sub-folders. And if duplicates are a problem, there's always Dupin, right?. Yes, still some work involved (after all, it took a long time for you to make that mess!) but operating on one set of parent folders at a time will make the process easier.

Rob Griffiths points out that in iTunes 9, as you are selecting or de-selecting tracks in any playlist or library, the size and time in the status display along the bottom of the iTunes browser window increases or decreases respectively. Neat!

posted in iTunes9, Tips and Info

As you may know: to run AppleScripts that were compiled on a PowerPC machine on Intel machines (and therefore Snow Leopard) requires Rosetta—an optional install on your SL install disc. While Rosetta is a fairly small install, some people have expressed an interest in staying Rosetta-free. There are quite a few of these types of AppleScripts here on the site and I'm working on updating them to Universal Binary (although a good percentage of these in the Retro Scripts category probably won't be updated by virtue of being obsolete). Long-time visitors may also have some of these scripts in their collections.

While you could wait for me to update these kinds of scripts to UB—disclosure: one of these days I will get around to admitting that I am a notorious procrastinator—you can update these scripts yourself by doing what I would do: open the script in AppleScript Editor, noting whether it is a compiled Script (.scpt) or an Application (.app), and re-save it. It will be re-compiled for your machine type, and if it is an Intel machine, will run without Rosetta. The "Run Only" and "Startup Screen" checkboxes can be left unchecked. Script Applications that use idle handlers need to be checked "Stay Open".

During the Save, if AppleScript Editor informs you that the "Document Format is Read Only: This script application is in a format that is no longer supported...", the case for non-bundled applications compiled pre-SL, just click the "Save As" button, and proceed with the save. In Snow Leopard, single-file-type apps are no longer supported. The defacto Application type is a bundle.

The AppleScript Release Note: 10.6 Changes page at Apple has more on this.

You may have been (prematurely) lamenting the inability to drag tracks from the iTunes Store to a playlist on your machine for later purchase because of the new format. Well, just put the store in Browse mode (Command-B). Tracks will be available the old-fashioned way, more or less: 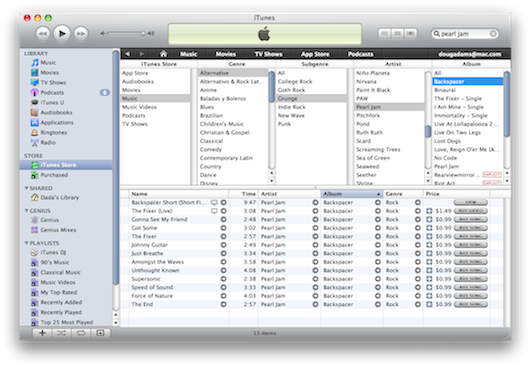 Get Current Track from iTunes LP

When you're playing an iTunes LP the Command-L shortcut to reveal/select the track in iTunes doesn't work. Unless.

This script will emulate the Command-L shortcut providing the iTunes LP is in a separate window:

In OS 10.5 and later you can target an app by its application id. I remember seeing that in the AppleScript Release Notes for 10.5 thinking "Hmm. Now how can I use that" and never really thought of anything. Until I needed to access QTP in both 10.5 and 10.6.

"QuickTime Player X" is a drastically different version of the player app and scripts written for QTP7 will not play well with it. However, it is scriptable to a modest extent. Its application id is "com.apple.QuickTimePlayerX" in case you need to target QTPX specifically.

posted in AppleScript, AppleScript Syntax, Leopard, QuickTime, Snow Leopard, Tips and Info
Site contents © 2001 - 2020 (that's right: 2001) Doug Adams and weblished by Doug Adams. Contact support AT dougscripts DOT com. About.
All rights reserved. Privacy.
AppleScript, iTunes, iPod, iPad, and iPhone are registered trademarks of Apple Inc. This site has no direct affiliation with Apple, Inc.
The one who says "it cannot be done" should not interrupt the one doing it.