NEW: Divvy Up A Playlist

I don't burn CDs much anymore these days. Sad! So when a Correspondent inquired if a script could be written to split up a very long playlist into CD-sized "sub-playlists", I fuzzily recalled (and Kirk confirmed) that iTunes will ask for additional blank CDs if a single CD is insufficient; such a script would be unnecessary.

But then I thought that there might be other reasons to split up a large playlist into smaller playlists. Say, for example, one wanted to limit the CD contents to only 60 minutes. Or, forget about burning CDs (which, I guess, I have), maybe smaller playlists would be convenient for one's listening regimen.

So I wrote the script anyway. It was a fun Sunday morning project yesterday.

Divvy Up A Playlist will copy the tracks of a selected user-created playlist in their Play Order to a series of new, smaller playlists each set to a maximum time length and each named with a user-supplied base name and number suffix incremented sequentially. Additionally, the new playlists can all be moved to a new Playlist Folder, like so: 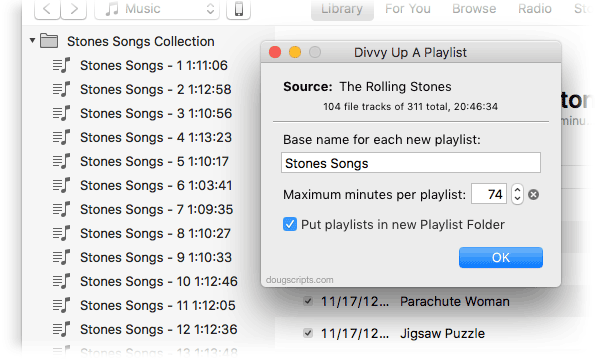 These particular playlists contain local file tracks as well as remote iCloud Music Library tracks, so I couldn't really burn CDs from them. But whenever I want to listen to my Rolling Stones collection in 74 minute chunks I'm all set (the script can create "sub-playlists" limited in size from 30 to 120 minutes; 74 minutes is the size of a typical CD).

Divvy Up A Playlist is for macOS 10.10 and later and free to use with a donation nag. More information and download is on this page.

[UPDATE; Many thanks to the first downloaders who reported a bug in v1.0. Quickly patched!]

posted in Managing Playlists
Site contents © 2001 - 2020 (that's right: 2001) Doug Adams and weblished by Doug Adams. Contact support AT dougscripts DOT com. About.
All rights reserved. Privacy.
AppleScript, iTunes, iPod, iPad, and iPhone are registered trademarks of Apple Inc. This site has no direct affiliation with Apple, Inc.
The one who says "it cannot be done" should not interrupt the one doing it.