In case you didn't know, a track entry in Music (and previously, in iTunes) can have more than one artwork image associated with it. In such cases, the first of its artworks is what I call the "display artwork" and the other artwork is what Apple calls...the "Other Artwork": 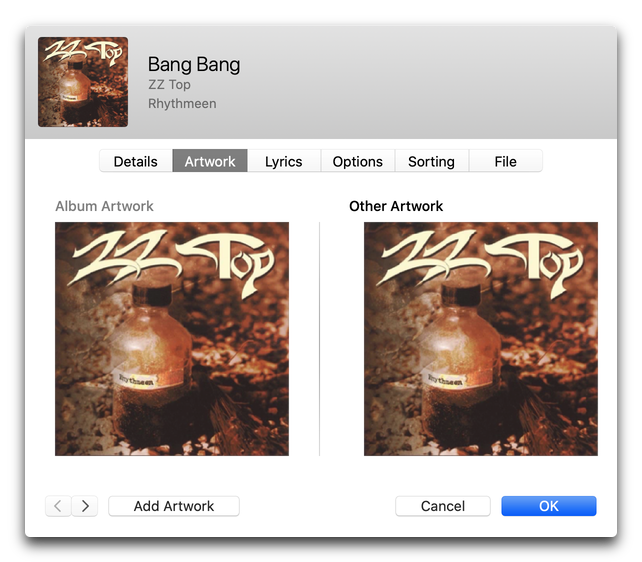 The "Album Artwork" image on the left is what is displayed throughout Music/iTunes as the artwork for the track. The "Other Artwork" doesn't get displayed anywhere except in the Artwork pane of the Info panel. And "Other Artwork" doesn't always mean other artwork singular; you can really go to town and add thousands if you want (probably; didn't try; crazy idea). Incidentally, I'm pretty sure only one image can be written a track's file metadata and that will be the "Album Artwork" image.

In AppleScript, a track contains artworks and each artwork is accessed by index: artwork 1, artwork 2...artwork 4732. The "display artwork" is always artwork 1.

Here's the bug-or-feature part of the essay (mostly bug I'm thinking): When you ask for any other existing artwork greater than 1, Music gives up a parameter error. This makes it impossible for AppleScript to access any artwork data other than artwork 1.

I may release the update to Re-Apply Downsized Artwork that side-steps the "insert" feature, but I thought I'd explain why I haven't released it yet at all.

posted in Bug or Feature?, Music app
Site contents © 2001 - 2022 (that's right: 2001) Doug Adams and weblished by Doug Adams. Contact support AT dougscripts DOT com. About.
All rights reserved. Privacy.
AppleScript, iTunes, iPod, iPad, and iPhone are registered trademarks of Apple Inc. This site has no direct affiliation with Apple, Inc.
The one who says "it cannot be done" should not be interrupting the one who is doing it.