Ripping CDs and converting audio files with iTunes isn't something a lot of people do anymore. Ahh, to be free of the slow, ear-stabbing torture of the done-chime that sounds after every import or conversion.

Sure, you could lower the volume on your machine everytime that boodely-oop! drives another tri-tone nail into your brain. Or you could replace the done-chime with some other sound or silence! with I Hate That iTunes Done Chime! 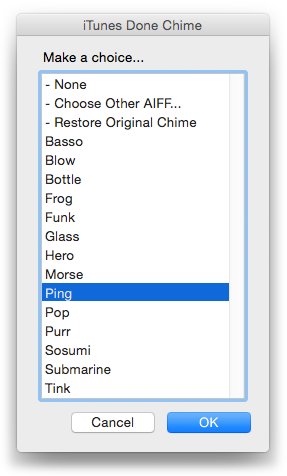 This applet will allow you to replace iTunes' Tri-Tone done chime ("The Hellmouth's Doorbell") with a System sound, a user-chosen AIFF file, or no sound (actually, a sound file provided that is just one second of silence).

This script hadn't been updated since 2009, during which time the additional security and permission considerations of the OS prevented it from working. The script now asks for permisson before it moves any files around.

Dev ID signed and free to use, more information and download is here.

posted in Controlling iTunes
Site contents © 2001 - 2021 (that's right: 2001) Doug Adams and weblished by Doug Adams. Contact support AT dougscripts DOT com. About.
All rights reserved. Privacy.
AppleScript, iTunes, iPod, iPad, and iPhone are registered trademarks of Apple Inc. This site has no direct affiliation with Apple, Inc.
The one who says "it cannot be done" should not be interrupting the one who is doing it.