Track Numbers in the Thousands

A Correspondent who uses my applet Multi-Item Edit to enter five-digit track numbers has reported that iTunes now formats these numbers with a comma; for example, 16789 becomes 16,789. iTunes itself will only allow three digits to be entered in the Get Info track number field, so it is unlikely that most users would ever encounter this. According to my Correspondent, this is a relatively recent iTunes behavior.

It's not like track numbers are "counting numbers". They're more like digits. Is that the arithmetical name for that sort of thing?

Multi-Item Edit is able to enter more than three digits because the AppleScript track number property accepts integers and I guess nobody ever thought of limiting the input to less than 1000.

Interestingly, track numbers used to only go to 99 because that was the Red Book-limited number of audio tracks allowed on a CD. Thus the original ID3 Tag spec only allowed two digits for track numbers. Because, the thinking at the time went, why would there ever be a need for more? Although I recall that you could "fake" more tracks using CD track indexes. I'm not sure what the spec is now since there's no such thing as audio files anymore. (Just kidding. Been reading too many tech articles on streaming lately.)

I'm going to file the comma issue as a bug just to be ticky-tacky about it, but—also interestingly—the episode number tag does not use comma formatting and it also only accepts integers, at least as far as AppleScript is concerned (you can see the track row at the top of this screenshot): 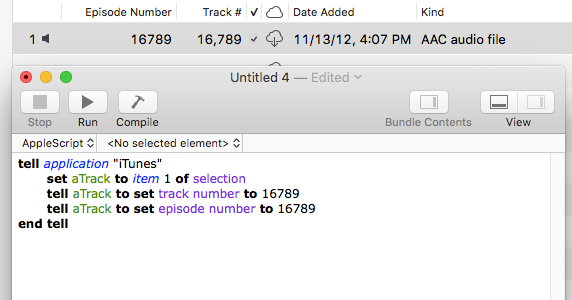 As I mentioned, it's unlikely most people would ever notice this, but you might if you were taking advantage of this greater-than-999 kludge with AppleScript.

posted in Bug or Feature?
Site contents © 2001 - 2022 (that's right: 2001) Doug Adams and weblished by Doug Adams. Contact support AT dougscripts DOT com. About.
All rights reserved. Privacy.
AppleScript, iTunes, iPod, iPad, and iPhone are registered trademarks of Apple Inc. This site has no direct affiliation with Apple, Inc.
The one who says "it cannot be done" should not be interrupting the one who is doing it.