What About Dark Mode? 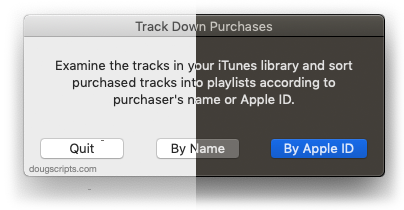 I wasn't rooting for a Dark Mode, the new low-light display preference in macOS 10.14 Mojave. And after working in it I don't particularly care for it. But I get that many people will find it compelling. So I'm guessing that there are a few "Dark Power" users who will expect that the scripts they download from this site will work in Dark Mode.

Well, they won't. Not all yet, anyway. In order for AppleScript apps and scripts to respond to Dark Mode they have to be built in Mojave. Anything built in prior operating systems won't know about Dark Mode. Now, other than updating the scripts just for Dark Mode, there aren't enough compatibility issues that necessitates a script to be updated yet (new security features, notwithstanding). Most all have been testing fine under the macOS 10.14 betas. So, in my opinion, there's no rush.

That said, there are some scripts and apps I will be updating for Mojave sooner than later, and these will include some of the more popular shareware apps and scripts. And then, eventually, as more scripts require regular maintenance they will be updated as a matter of course.

posted in Mojave
Site contents © 2001 - 2021 (that's right: 2001) Doug Adams and weblished by Doug Adams. Contact support AT dougscripts DOT com. About.
All rights reserved. Privacy.
AppleScript, iTunes, iPod, iPad, and iPhone are registered trademarks of Apple Inc. This site has no direct affiliation with Apple, Inc.
The one who says "it cannot be done" should not interrupt the one doing it.