So busy slapping 'em together that I hadn't posted I'd updated 'em. Here's the last few updated scripts (October 29 - November 8):

Set Video Kind of Selected v5.0 - change the video kind property of the selected tracks to your choice of "Home Video", "Movie", "Music Video" or "TV Show". Additionally, "Show Name", "Season Number", and incremental "Episode Number" can also be set or cleared for each selected track.

Convert and Replace v2.0 - convert the selected tracks using an encoder chosen on-the-fly (the encoder's current Preferences-set options will be in effect) and replace the originals throughout the playlists of your entire library with the newly converted versions. Additionally, you can opt to Trash/delete or keep the original files and tracks.

Trackographer v4.0 - stay-open applet will monitor iTunes and send tag and time-of-play information of each track that plays (including iTunes Radio and internet radio streams if they provide track info) to a text file. Preferences can be set to include or not include various basic tags and to create a plain text file or a tab-delimited text file which can be imported into a spreadsheet.

Multi-Item Edit v2.1 - mostly bug fixes; edit most track tags (and some additional options) in a single window which emulates the pre-iTunes 12 "multiple items" format; that is, a checkbox adjacent to each tag allows you to select which changes are to be applied to the selection's tags.

Delete Selected Files v2.0 - remove each selected track from all playlists and Trash or immediately delete their corresponding files. Some iTunes delete commands will not move files from outside the "iTunes Media" folder to the Trash. This script worksaround that.

Find Truncated Tracks v2.0 - assists with segregating iTunes Match tracks that appear to get cut-off when played (due to a possible bug which Kirk describes here). Then these truncated tracks can be deleted and re-downloaded intact (by you, not the script).

Playlist Manager v2.0 - iTunes only allows one playlist to be selected at a time. This applet can perform common useful tasks on a multiple selection of playlists: rename (add text, remove text, search and replace text), duplicate, delete, export, merge.

Search Results to Playlist v2.0 - search a chosen category (Library, Music, Movies, etc) or the selected playlist for user-entered text by All, Song, Artist, Album, or Composer tag and copy the track results to a Search Results playlist, which will be created automatically if necessary. Can optionally re-create or append to the Search Results playlist on each run. Floats over iTunes while active for easy access.

This will cause any script or app which expects a selection of Audiobooks library tracks to presume that no tracks are selected. It also affects such tracks that are dragged.

It doesn't appear to affect tracks outside the Audiobooks library, such as MP3 voice recordings, or CD books ripped as AAC, and so on.

[UPDATE: A Correspondent suggests placing audiobook tracks in a separate playlist outside the Audiobooks library playlist. I can confirm that this works as well (and is likely a better workaround than changing the audio kind.)

I am extremely happy with the feedback on Multi-Item Edit. So I wanted to get a new version going with more tags as soon as I could manage it. 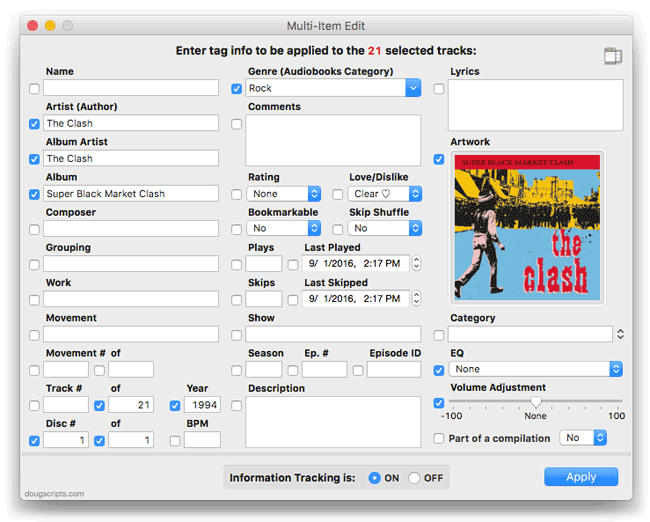 Multi-Item Edit v2.0 lets you modify the tags of a multiple selection of tracks in a single window—you can see everything without having to dart between tabs.

Version 2.0 adds Artwork, Name, Sort Name, Album Rating, Plays, Skips, Played, Last Played Date, Last Skipped Date, Lyrics and Category tags; sorting tags have been moved to a togglable side drawer. I also added "Checkmark All" and "Checkmark None" commands as a convenience. You probably wouldn't want to apply all checkmarked tags, but you may want a majority of them (or a minority of them) and clicking on checkboxes all afternoon is no way to go through life, son.

This is a free update for registered users. Multi-Item Edit is $1.99 with a ten day full-featured trial period.

1) When you select a CD in iTunes 12, the keyboard shortcut Command-I no longer shows the CD's Get Info panel. The "Get Info" button does work as expected.

2) Likewise, while a CD is selected, the View menu's "View Options..." and Command-J shortcut do not work. The menu flashes, which is quaint. But you can only show/hide the columns of a CD playlist by right-clicking the column headers.

3) (Did I say two?) Speaking of Showing columns: you can only show/hide one column at a time by using the "Show Columns" popup in the "View Options" panel. Try turning fifteen or so columns off or on and see how you feel afterwards.

Secret Get Info Window in iTunes 12

Not to undermine use of Multi-Item Edit, but if you want the real "old-school" Get Info window:

Select one or more tracks. Press and hold Option then Right-Click the selection. Choose "Get Info" from the contextual menu that appears. (Thanks, Paul J.)

No clue if there are plans to eventually drop it or even why it's still there.

[UPDATE: Actually, selecting the contextual menu or the File menu and then Option-Clicking on "Get Info" gets the job done.]

New Last Played Date v4.0 will set the Last Played/Last Skipped date of selected tracks to a new user-entered date, with an option to increase or decrease Plays/Skips, or set tracks to no date and no Plays/Skips (effectively making them never played). 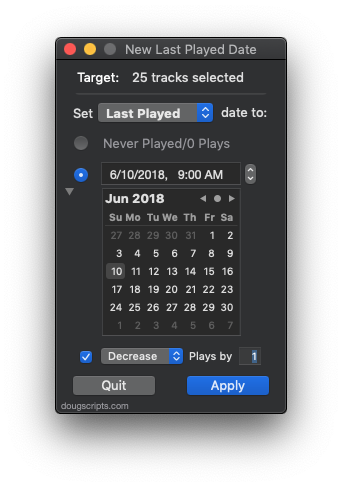 This latest version has support for OS X 10.10 Yosemite and iTunes 12, adds a "Check for Update" command, and makes a few minor UI and performance tweaks.

A new feature in OS X 10.10 Yosemite is Dictation Commands, which replaces the venerable "Speakable Items". Essentially, this allows you to speak commands at your machine to launch apps and scripts, open files, and activate other tasks. Once you've set up Dictation Commands, you engage the Dictation Response HUD, a floating display indicating that your Mac is "listening", by pressing a set of command keys (fn pressed twice, by default). While the HUD is displayed, your Mac will be listening for spoken commands which you have associated with apps, scripts, Workflows, and so on.

I was hopeful I could fire off the Play Random Album script with a voice command. What a boss I'd be at my next party.

Unfortunately, the joy-killer about using iTunes with Dictation Commands is that while the Mac is in "listening" mode waiting for you to speak a command, iTunes is muted! Even with headphones plugged in. So, to use Dictation Commands while you're listing to iTunes, you've got to engage the HUD (two keyboard clicks), thus muting iTunes, speak your command to activate the script, then turn the HUD off to un-mute iTunes (another two keyboard clicks). And it's not exactly instantaneous. If you're launching a script to play tracks or playlists, well, you might just as well launch it from the Script menu with a mouse click.

An additional minor detail is that, while compiled scripts (.scpt) and applets (.app) work with Dictation Commands, script bundles (.scptd) do not. I use a lot the latter since I can bundle Scripting Libraries in them.

I'm sure Dictation Commands will be great for users who'd like to (or need to) bold their text by saying "Bold this text!". But really. Four keyboard clicks. The (slight?) inconvenience of interupting my music for a few seconds. Plus the effort to set things up in System Preferences and having to convert script bundles into plain compiled scripts or slower-launching applets. (Daniel Jalkut has a couple of other gripes, too.)

This was going to be a project post on how to use Dictation Commands with various AppleScripts for iTunes because awesome. But I'm afraid it didn't turn out that way since it's just that much trouble to bother. The magic isn't worth it. I'll continue to use keyboard shortcuts.

You may have been surprised, as I was, by the new Get Info panel in iTunes 12. While it provides pretty much the same utility as the previous incarnation's Get Info panel, it's souped-up UI-wise. One function that's missing is the Multiple-Items Edit checkbox feature to designate what tag changes to apply to the selection of tracks. I think what it does now is just detect changes and apply only the changes. I think. Not sure. Anyway, I'm not 100% comfortable with that. 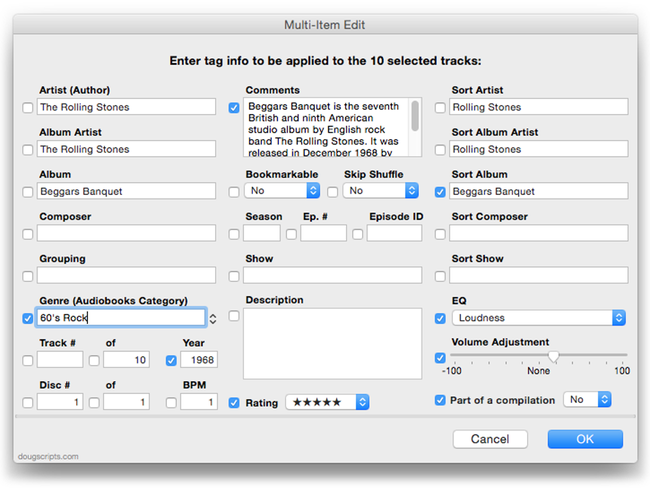 It works just like the old Get Info window in Multiple Item mode: It recognizes any common tags and displays them. Just enter/change some text or options and checkmark the boxes for the tags you want applied to a multiple selection of tracks, including "blank" entries.

This was something I was working on over the Summer so I could batch edit tags without having to switch among Get Info window tabs. But I re-jiggered it a bit as a new release for people who like their Get Info panel old-school.

I want to note that if you notice some tags and options missing (artwork, obviously), well, this is only v1.0.

Multi-Item Edit is $1.99 with a ten day full-featured trial period.

Apple has released iTunes 12.0.1. It's not just available for Yosemite, but Mavericks as well. You'll find it via the Mac App Store in the "Updates" section.

posted in iTunes 12
Site contents © 2001 - 2022 (that's right: 2001) Doug Adams and weblished by Doug Adams. Contact support AT dougscripts DOT com. About.
All rights reserved. Privacy.
AppleScript, iTunes, iPod, iPad, and iPhone are registered trademarks of Apple Inc. This site has no direct affiliation with Apple, Inc.
The one who says "it cannot be done" should not be interrupting the one who is doing it.